A Brief History Of Sampling

A Brief History Of Sampling

Sampling is so common in music these days that we often take it for granted and don’t bother to think about what exactly it is and how it evolved. In this post I am going to give you a brief history of sampling, highlighting some of the major developments and products along the way that helped shape sampling as we know it today.

The Mellotron is an electro-mechanical, polyphonic tape replay keyboard originally developed and built in Birmingham, England in 1963. It evolved from a similar instrument, the Chamberlin, but could be mass-produced more effectively. The instrument is played by pressing its keys, each of which presses a length of magnetic tape against a capstan, drawing it across a playback head. Then as the key is released, the tape is retracted by a spring to its initial position. Different portions of the tape can be played to access different sounds. 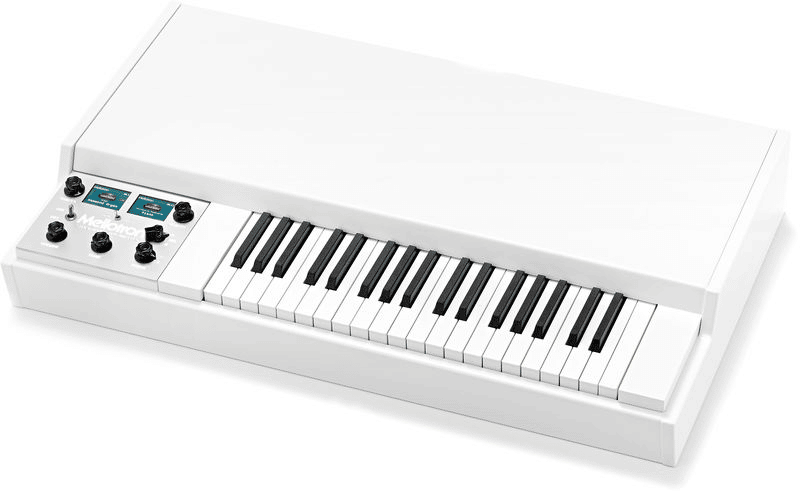 The Mellotron became more popular after it was made famous by the Beatles for having used it on several now classic tracks. Besides its primary use as a musical instrument, the Mellotron was also used as a sound effects generator for radio and television shows at the BBC throughout the 60s.

First released in 1977–78, the Synclavier was popular among both electronic music composers and music producers, including Mike Thorne, an early adopter from the commercial world, due to its versatility, its cutting-edge technology, and distinctive sounds.

The early Synclavier I used FM synthesis and was sold mostly to universities. The initial models had only computer and synthesis modules, later models added a musical keyboard and control panel.

The Fairlight CMI (short for Computer Musical Instrument) is a digital synthesizer, sampler and digital audio workstation introduced in 1979 by Fairlight, of Australia. Though crude by today’s standards, the CMI’s ability to emulate real instruments made some refer to it as an “orchestra-in-a-box”, and each unit came with eight-inch, 500-kilobyte floppy disks that each stored twenty-two samples of orchestral instruments. The inclusion of a sampler in the instrument made it way ahead of its time setting the standard for workstation synths for decades to come. The Fairlight was an enormous and expensive piece of technology. At a starting price of $36,000 USD (Approximately $130,000 today) the CMI was prohibitively expensive for all but independently wealthy musicians.

Digital delay lines (DDLs for short) were a form of sampling that worked by allowing users to “freeze” and retrigger audio. Producers used DDLs to trigger everything from drum sounds to background vocals. Besides being expensive prohibitively expensive for most musicians, DDLs had a major limitation in that once the units were turned off, samples were cleared from memory. Popular units included the AMS DMX DDL and BOSS DE200.

Released in 1984 to huge acclaim, the Emulator II (or EII) was E-mu’s second sampler. Like the original Emulator, it was an 8-bit sampler, however it had superior fidelity to the Emulator due to the use of digital companding and a 27.7 kHz sample rate.

It was priced similarly to the original Emulator, at US$7,995 for a regular model, and $9,995 for a ‘plus’ model featuring extra sample memory.

You’ve heard the Emulator II has been heard on classic hits like “Sledgehammer” by Peter Gabriel and the Pet Shop Boys’ “West End Girls”. It has also been used for a number of film scores as well, such as the Terminator 2: Judgment Day score by Brad Fiedel, many of Michael Kamen’s film scores, such as Lethal Weapon and Highlander and almost all of John Carpenter’s films in the 1980s.

The Akai S900 was a major leap forward in sampling offering much better audio quality, up to 1 minute of recording advanced editing and individual outputs. The success of this unit proved mass market potential of hardware samplers and it soon faced competition from the likes of Roland, Yamaha and Casio. The S900 was succeeded by the S1000 which offered CD Quality audio fidelity,

The Akai MPC (originally MIDI Production Center, now Music Production Controller) is an integrated digital sampling drum machine and MIDI sequencer designed by Roger Linn and produced by Akai from 1988 onwards. The MPC had a major influence on the development of electronic and hip hop music, allowing musicians and producers to create elaborate tracks without a studio and opening the way for new sampling techniques. The MPC was a collaboration between the Japanese company Akai and the American engineer Roger Linn. Linn had designed the successful LM-1 and LinnDrum, two of the earliest drum machines to use samples. The MPC60 allowed for sample lengths of up to 13 seconds, which were stored on floppy disks. Later models would take advantage of higher capacity disk media like zip disks and much later compact flash cards.

1997 saw the introduction of Nemysys Gigastudio (Later Tascam Gigastudio). This technology introduced disk based sampling, streaming from a hard drive instead of ram which at the time was revolutionary, Gigastudio offered 160 Note polyphony, 64 midi channels and outperformed all hardware samplers of its time. And at a cost of just $700 it was incredible value. After more than a decade of heavy use among producers and film composers, Gigasampler was discontinued by Tascam in 2008. Emagic’s Xtreme Sampler 24 (EXS24 for short) was introduced in 2001 as the sampling solution for Logic Audio. It offered 64 note polyphony, compatibility with Akai and other formats and up to 24 bit resolution. Native Instruments’ first attempt at sampling was made in 1999 via Reaktor, their modular software synthesis engine, though the functionality was crude. In 2002, Native Instruments would release ‘Kontakt’, a full-fledged dedicated software sampler offering a whopping 256 note polyphony, 32 outputs 16 part multi-timbral midi and support of akai and giga formats. The rest as they say is history. It has been more than 20 years since the introduction of software sampling and it is clear that the technology is here to stay. Computers are becoming more powerful, sample libraries more demanding and musicians are spoilt with high quality options. It is truly a great time to be a musician! No one knows what the future holds for sampling but with Moore’s Law dead, I expect the traditional sampling world to stay mostly the same for the foreseeable future. Perhaps we’ll see more experiments in sample modeling and eventually AI generated sampling, where any instrument’s sound can be generated instantly by a neural network. For now, I like where we are and still think there are plenty of great samples yet to come!