Do you really need another reverb? Our answer is absolutely yes! Our list here isn’t about your standard reverbs that fit into modern music production, instead we are exploring a few great reverbs for that larger than life cinematic sound. Here’s what we’ve found for you.

We have probably talked about this one in some of our previous articles but we just can’t get enough of Blackhole. It’s THAT good. Derived from Eventide’s H8000 Ultra-Harmonizer, this reverb is specifically targeted at sound designers looking to create some unreal spaces. And it does just that.

Blackhole features some really creative control options that invite you to manipulate and randomize everything in real-time, especially the bipolar size and gravity knobs. Aside from those, there is a hotswitch button and a ribbon controller which enable you to jump and morph between two different parameter states.

This is not a reverb for a conventional mix. This is a reverb that feels at home with massive evolving soundscapes, synth ambient spaces and cinematic textures. It just sounds huge and it has the price to follow. You can own it for €47.

Adaptiverb features a machine-learning algorithm in the form of a “bionic sustain synthesizer”, and what it does is that it synthesizes the reverb tail based on the characteristics of the signal that’s being sent into Adaptiverb. Basically, this is a reverb synth and that makes it very unique. What you can do with it is simply amazing. You can even tune the reverb tail to specific note pitches.

Of course, from this we can conclude that this reverb is targeted towards sound designers, but composers and ambient music producers will find it very useful indeed due to its possibility to create some lush conventional spaces fit for various instruments as well. This reverb comes at a price tag of $249.

Well the name just speaks for itself doesn’t it? The team at LiquidSonics are well-established developers of some of the finest software reverbs on the market. Cinematic Rooms is their latest and greatest specifically targeted at composers and mixing engineers working in audio post-production for the big screen.

This reverb is dedicated to creating the best possible acoustic room simulations for surround, but it supports stereo as well. This is one of the first commercial native reverb plugins that support latest Atmos workflow as well.

Standard is only stereo and covers all the basic controls a reverb might have with an impressive set of presets to give you that larger than life sound. Whilst the professional version expands on that with over 200+ presets and extensive control parameters for surround sound. Cinematic Room Standard comes at a price of $199 while the professional version comes at a hefty $399.

This is another offering by Eventide for this year. It is a very lustrous reverb with parallel pitch shifters, also derived from the H8000 algorithm. This is a perfect tool for adding dreamy ambience to your guitars, keys, synths… Well it makes anything sound really cinematic and out of this galaxy.

One of the cool features is the ability to infinitely feedback the signal which results in cascading reverbs that smear all over the stereo image. As with Blackhole there is the ribbon which enables you to program any control. There is also a hotswitch for changing sets of parameters inside of a single preset and that enables you to switch from two setups. Finally the FREEZE button allows you to make infinite textures out of single notes resulting in metallic shimmers. This reverb can be yours for only $99.

Another space and texture Swiss army knife of reverbs for sound designers. It features somewhat of a cluttered interface, but once you get the hang of it you are in for a treat. Aside from reverb options, RP-Verb 2 also features processing stages for distortion, chorus and EQ and all of the parameters can be manipulated by using envelopes, envelope followers and LFOs which is an amazing feature for sound design. There is also a Reverser section which enables you to reverse your reverb signal and it is tempo-locked to your project. For $99 you get a lot of features. 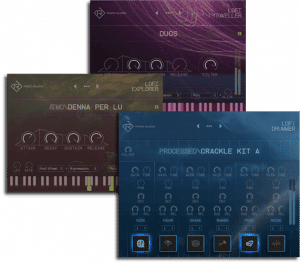