Creating A Loop Based Composition

Creating A Loop Based Composition

Like it or not, loops are a mainstay of music production. Whether you use them as a jumping off point for a new track or as the primary material for a composition, there is no doubt that they can be useful. In particular loops can be great as an exercise in arranging and production, allowing you to focus on the building rather than the creating and therefore they can be a valuable learning tool for new producers.

In this post I am going to show you a very simple example of how to create a track from end to end using loops exclusively. I am doing this in Logic Pro, but the process can be adapted to be effective with any DAW and any collection of loops.

Whether you are composing with loops or your own material you are going to need a palette before you can get to the actual work of writing. For this example I am going to be walking you through the creation of an electronic track so I can think of no more appropriate place than the drums.

For the drums I am going for 4 kicks with different characters. One for low end fatness, two kick samples with “body” and a little bit of presence and a pumping fx kick that I just found interesting. Keep in mind as I choose samples and populate my arrangement window that I may not use them all. In this phase of the process I am simply choosing based on what inspires me, later on as I build the arrangement I will be more discriminating.

With the low end of the drums filled out it’s on to the “toppers” which will ultimately create the movement in the track. I found a loop I liked featuring claps and a shaker but unfortunately it also has a four on the floor kick pattern. Luckily the kick sample is purely low end, so I use an aggressive high pass filter to cut out everything below 1k. 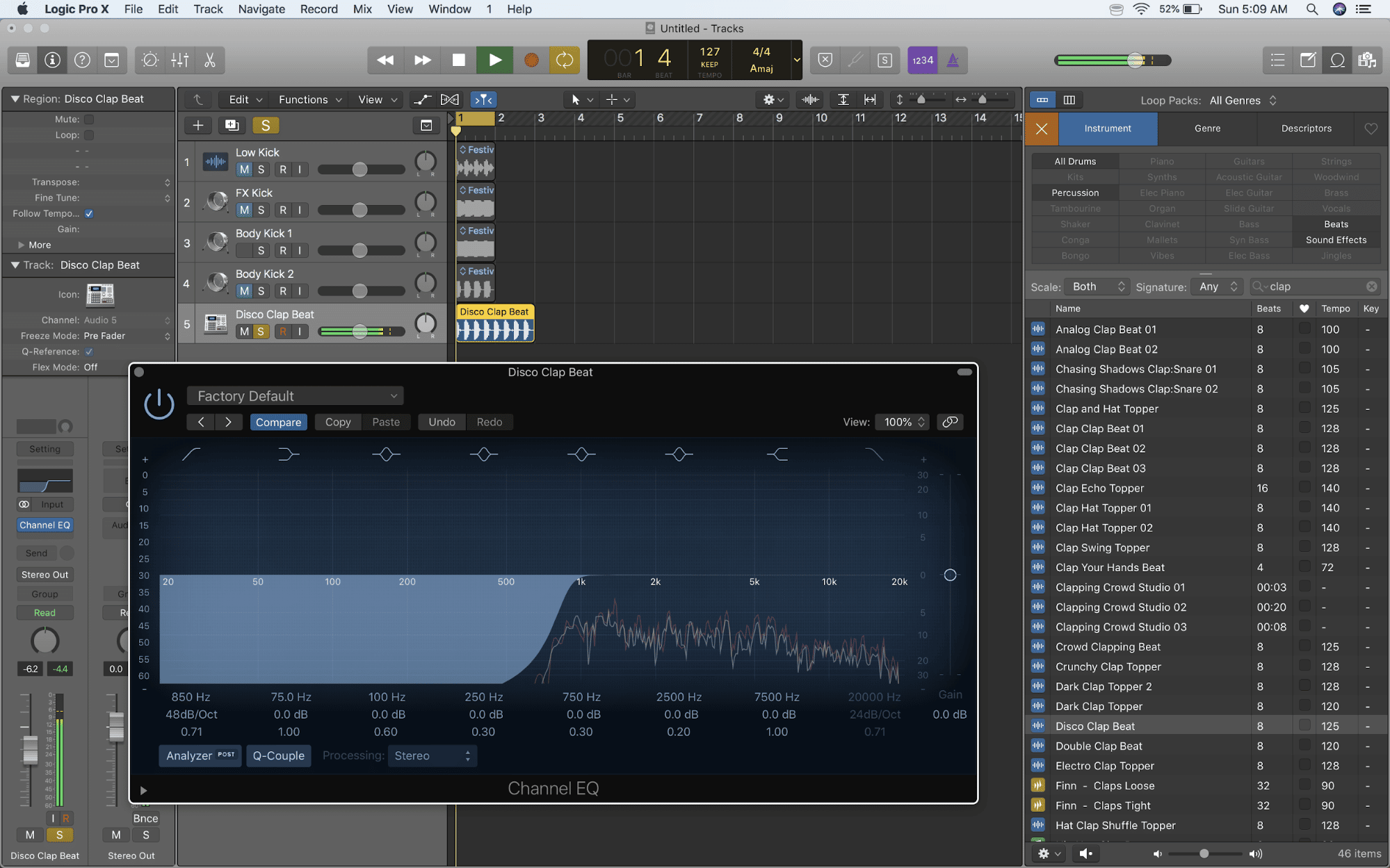 I found a great hat loop I’d like to use, but like my topper loop, it also has some other elements in the arrangement. Since it is a midi loop, I’ll just edit out the non, hi-hat data and voila, I’ve got an isolated hi hat that will fit into my arrangement without competing with other drum elements.

Just for fun I’ll throw in some snare fills to spice things up. I found several that I really liked. I will probably not use most of them but I’ll make that decision later on. 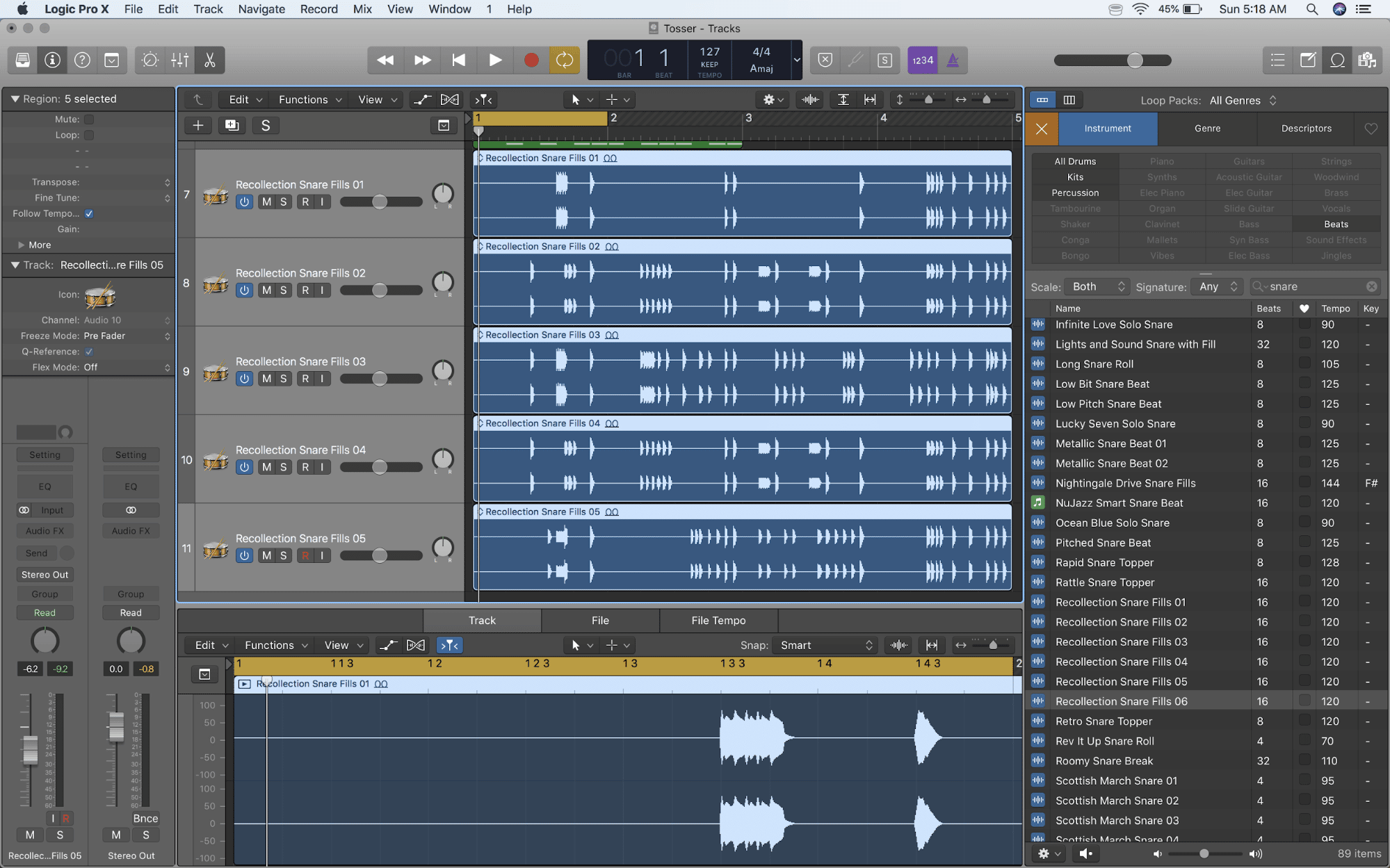 The last bit needed to fill out the drums is a snare to hit on the 2 and 4 of every bar. I’ll go with this nice “big room” snare loop, which has a nice full sound. The drums are done, but I’d still like to give myself some options for driving the track later on as listening to the same static arrangement of kick, snare, hats and shakers can get pretty old so I’ll throw in a conga and bongos loop for good measure. 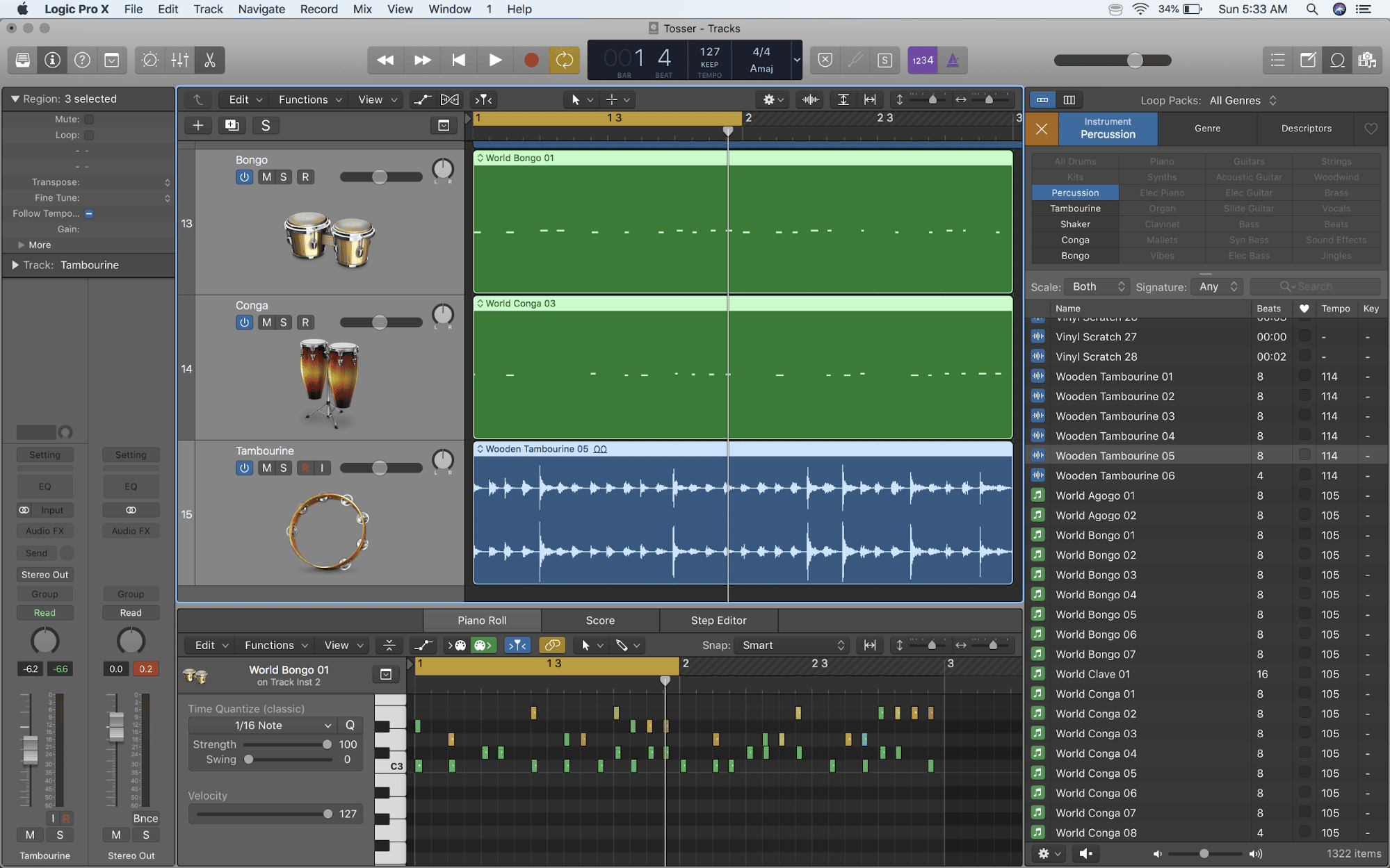 Bass will be covered by a nice, bouncy synth bass loop I’ve found in the key of F. I’ll have to keep that tonality in mind as I select the rest of the tonal elements for my track. I’ve chosen a nice slowly evolving pad and a couple of cool, pulsing reversed pads to lay down the harmony. 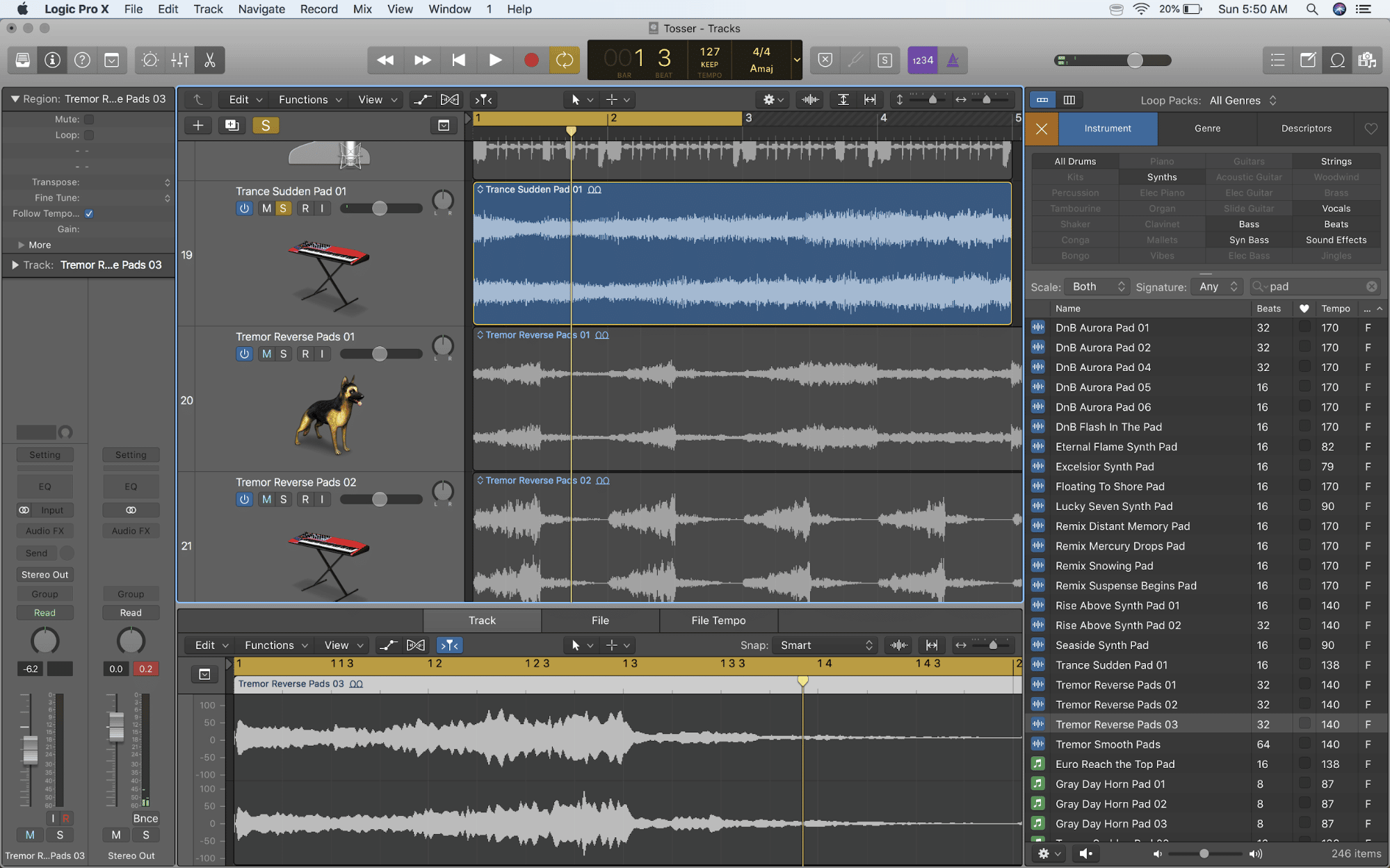 FX are great for transitions and endings so I’ve thrown in a riser and boom that I may use later on. 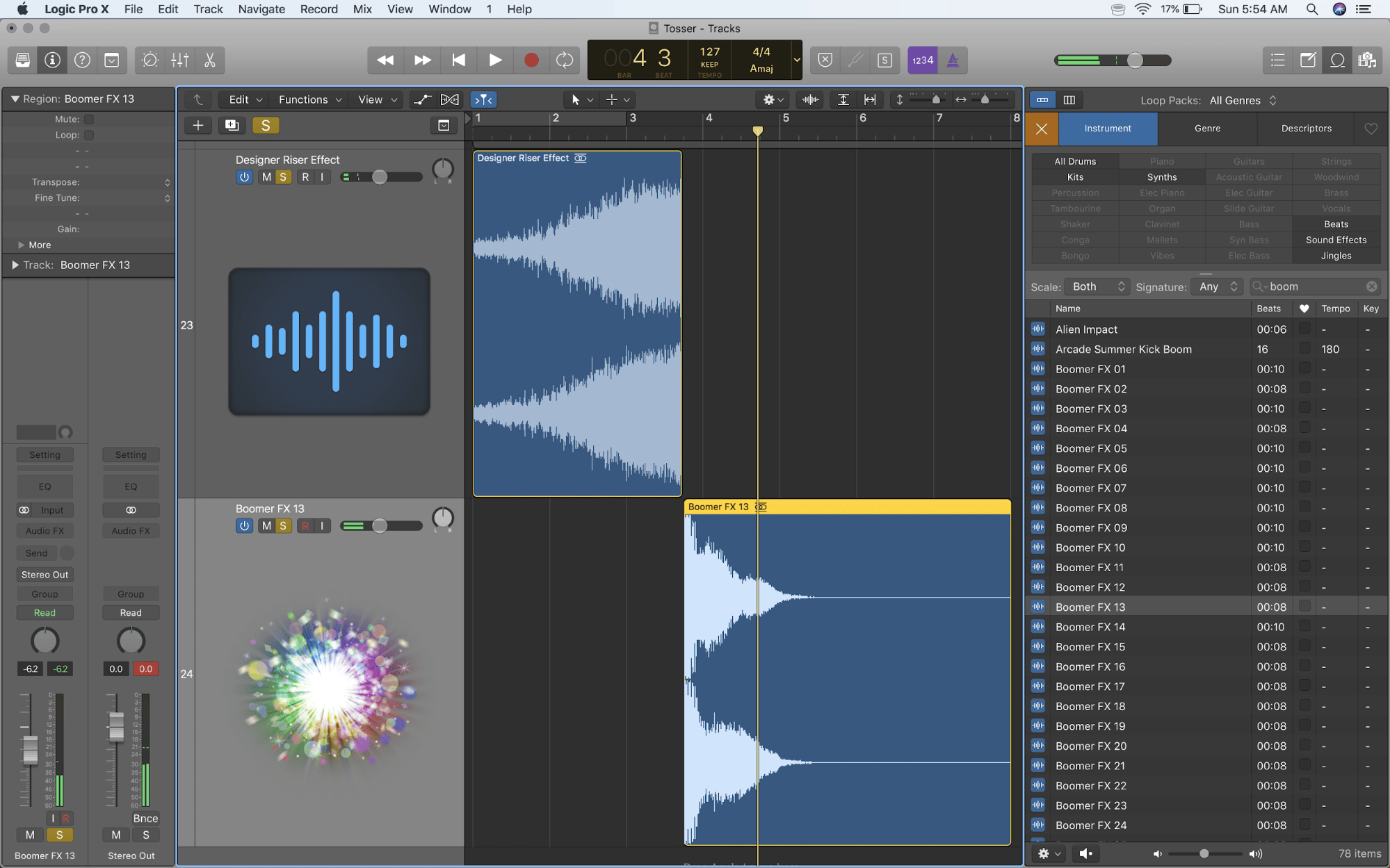 With all the elements collected I can get to the work of arranging, but first a little bit of housekeeping. I always group instruments into colours before doing any writing. This is an optional step but I highly recommend it as it makes arranging and later mixing a lot easier. 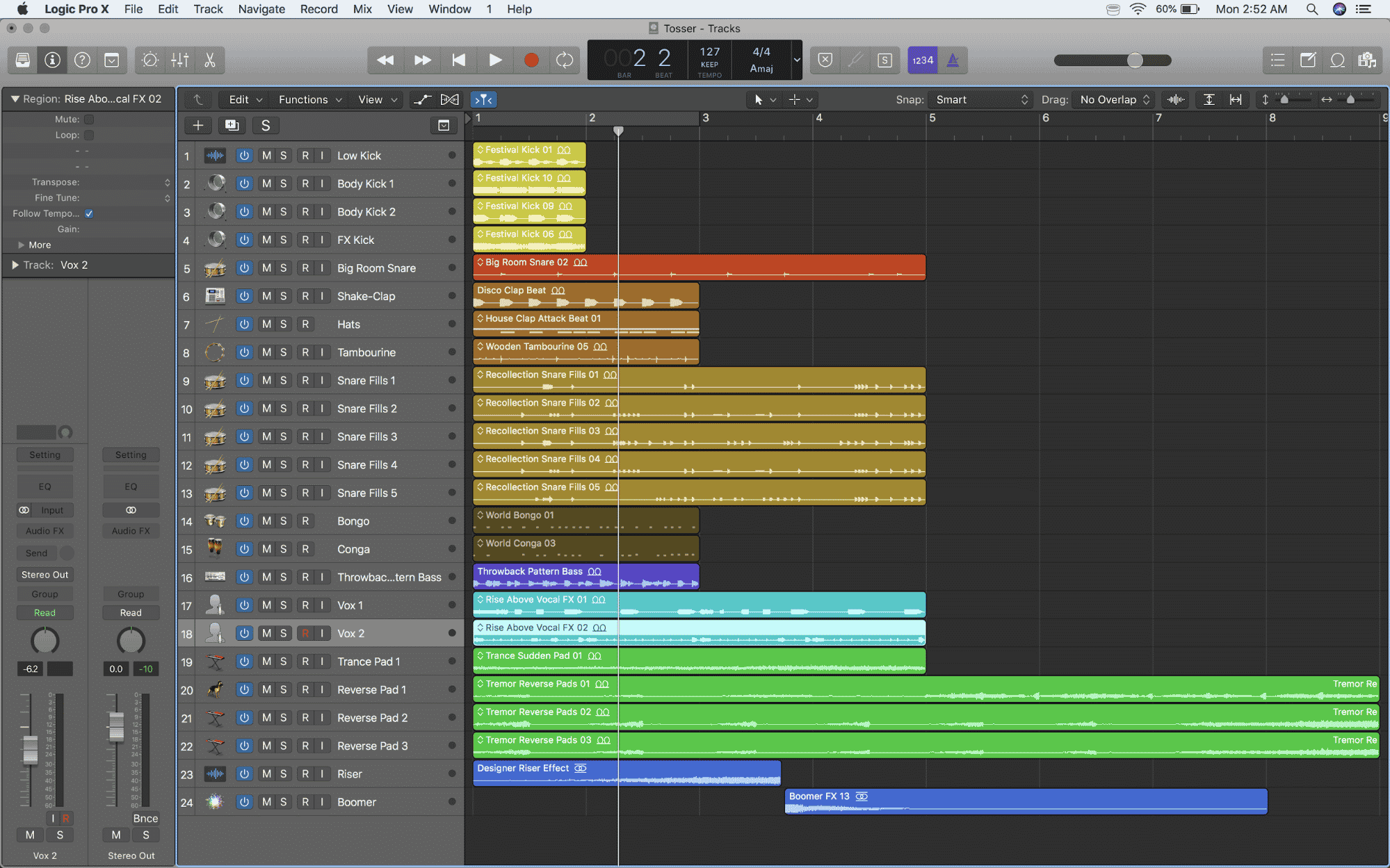 I’ll loop all the elements the entire length of what I want the track to be (or at least approximately) and get to work creating the arrangement. 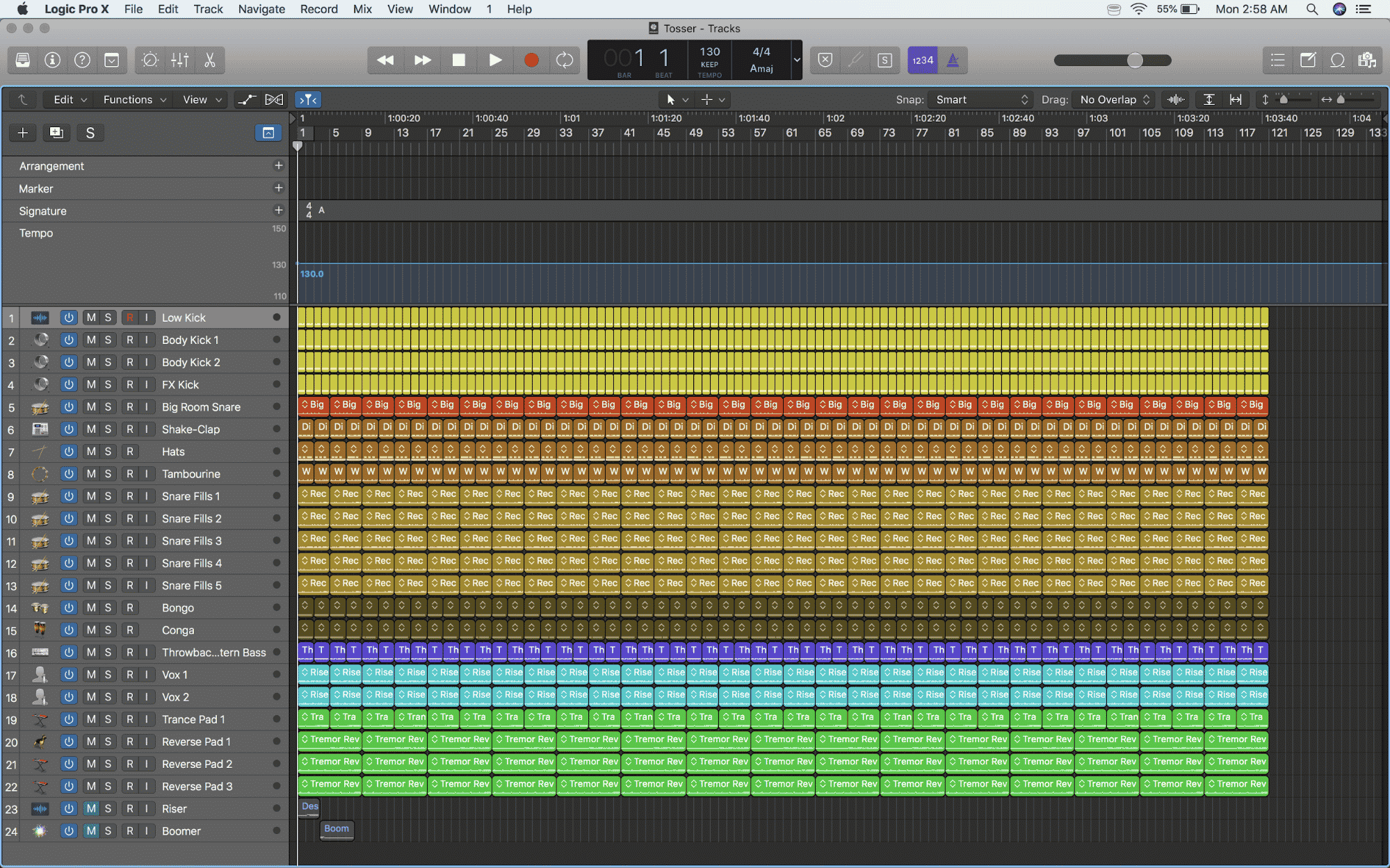 Just for starters I’ve created a 16 bar intro that is sparse enough to leave room to build later on. I am using kicks, snare on 2 & 4, tambourine and bass. Notice how the elements cascade into one another starting with the kicks. In general I try to follow a rule of adding a new element every 4 to 8 bars to avoid monotony. That is a convention I will stick to throughout the creation of the track. The A section gets a little busier, keeping the original elements from the intro and adding snare fills, hats and a pad.

Here is where things start to get interesting. The drums and percussion fill out adding all the elements including congas and bongos and the vocals are introduced albeit sparsely. Both for the sake of economy and building interest, the vocal loop is heavily edited just focusing on a single phrase. Now we have the full arrangement, drums, percussion, snare fills, sustained and reversed pads and the vocal loop in its entirety creating the climax of the track. 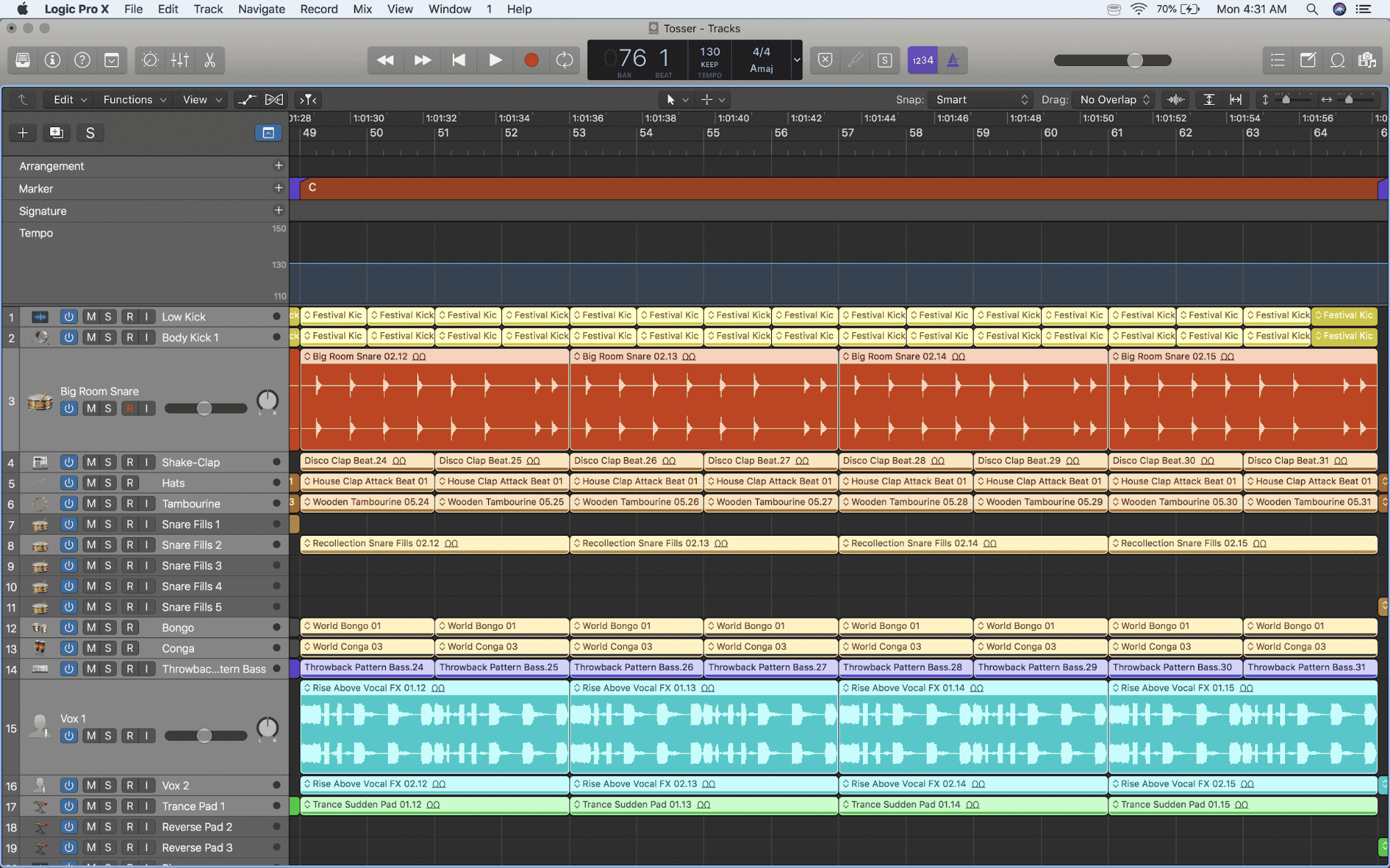 The natural thing to do after a big build up is a release. In the break, the track is stripped down to just high percussion, snare fills, a pad and a new vocal loop.

To end the track, slowly introduce more and more elements until they are all in building for a final climax culminating in a rise and hit courtesy of the riser and hit I set aside earlier in the process. 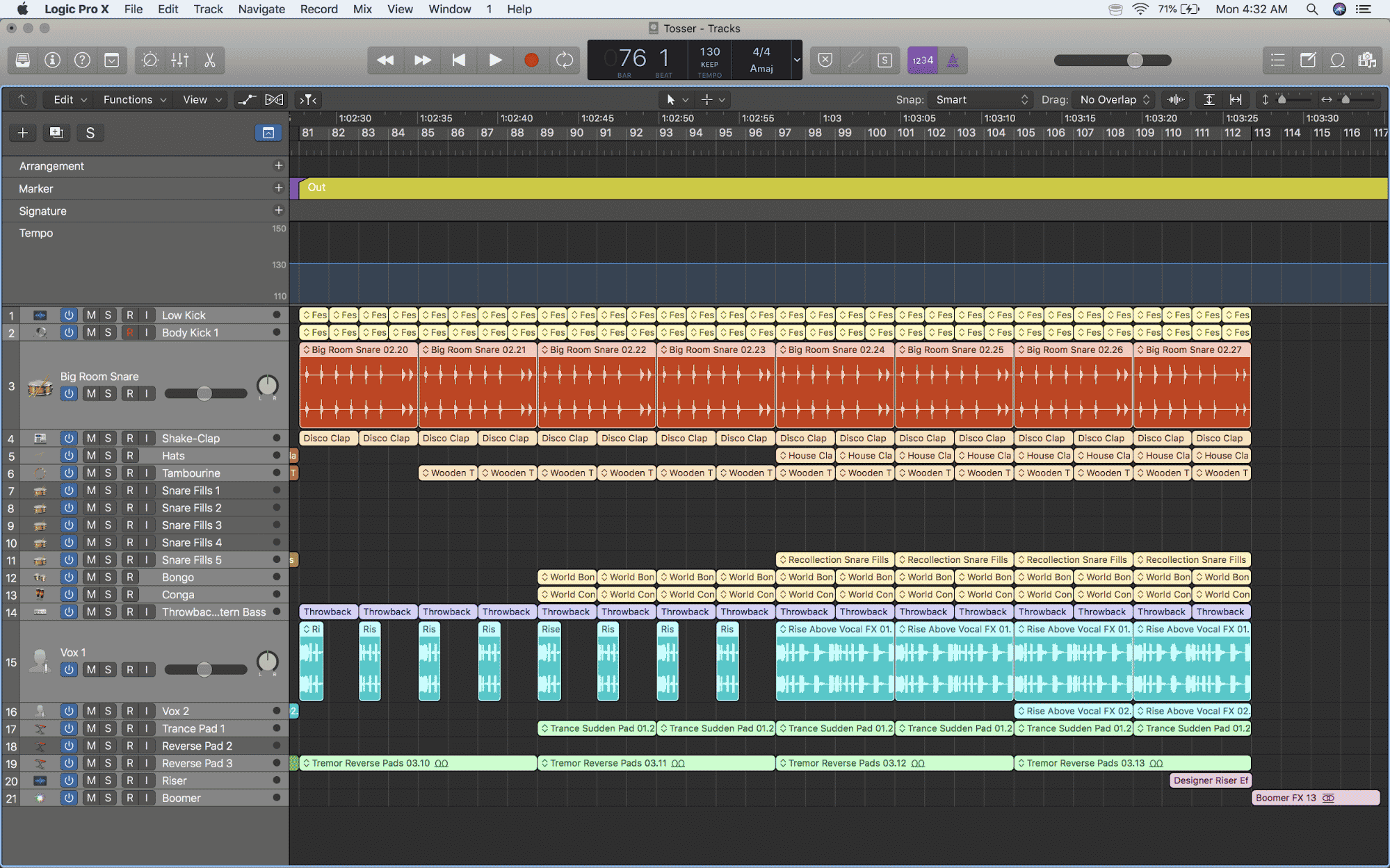 Here is a look at the arrangement in its entirety. As useful as loops are, my guess is that at some point you will want to use your own material in a composition. To adapt the principles of this article to your own material, simply loop the first four or 8 bars on your timeline and create as many layers as you can before you run out of ideas.

This is a great way to put a template to use as it will already have all or most of the elements that you want to write with for a given genre. Once you have all of your layers composed, you can more or less follow the steps detailed in this article to create sections and build your arrangement by subtraction.