Synths come in various sizes, types and price ranges and there are a plethora of synths out there that can fit the need of every EDM producer, sound designer or composer alike. But all great things come at a cost now don’t they? Well, not necessarily, because we at VSTBuzz have looked around for some really great-sounding and affordable hardware synths that can fit into everyone’s budget. If you are just starting out your hardware synth adventure, you might want to check these out. We managed to limit our budget to roughly under 500 USD/EUR and we are looking at both analog and digital synths out there. 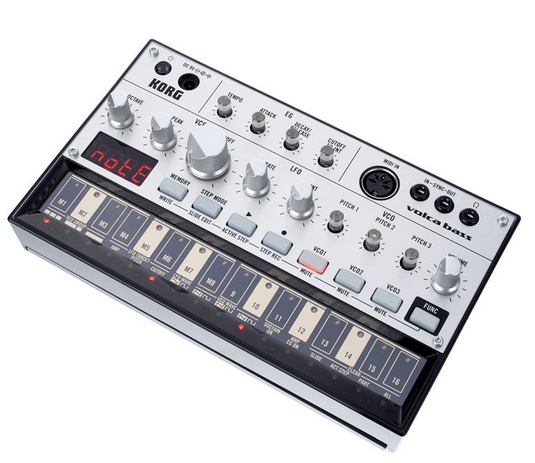 I am yet to meet a synth enthusiast who doesn’t own at least one of the Volca models. My current favorite is the Volca Bass due to its 3 oscillators in combination with a really awesome filter and it sounds absolutely stellar. It has all the essentials of a true analogue synth, plus a really cool “keyboard” touch strip that is also used to punch in notes into a built-in sequencer that is a part of every Volca synth. Don’t judge this synth by its size.

As small as it looks, it packs a huge sound. Even though it’s monophonic you can tune each of the 3 oscillators to create a chord that you can play by pressing only one key. Regarding outputs, there is a main headphone out and a sync out & sync in for tempo-syncing with other Volcas and analog sequencers. It is battery operated so you can take it out with you everywhere, but it can also accommodate an external power supply. For 132 EUR this is a great value synth. 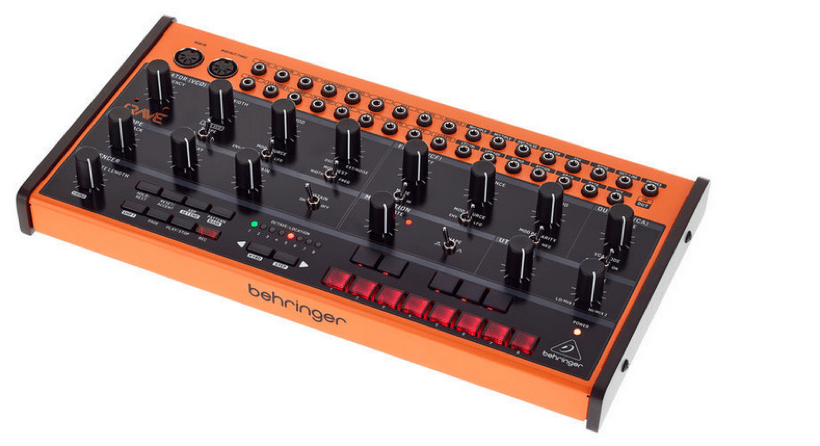 Of course we are including Behringer here. There are many naysayers out there talking controversial things about Behringer’s model of doing business, but you cannot negate the impact Behringer has had on the synth market.

There are many other models of Behringer’s synths that can fit our budget limit here (well, almost all of them), but we wanted to include one that is really great for someone who wants to walk the dark path of analog modular synths.

Now, Crave is a semi-modular synth which means that it is already pre-patched so you can get some sounds right away. But it does feature 32 patch points that enable you to rewire the insides of Crave for even more experimentation. Plus you can use Crave as a hub for your future modular synths because you can connect almost anything to it with the included patch cables.

Featuring only one oscillator which makes Crave a monophonic synth, you might feel that you will miss out on something. But rest assured that you are in for days and days of fun and creativity with just this one oscillator, a filter, an LFO and one envelope. Just fiddle with patch points and you will see what I mean. And remember that there are a lot more expensive synths out there with just one oscillator (Moog Mother for example), so for a 150 EUR there isn’t much to argue about. Oh, there’s also a built in sequencer AND an arpeggiator included. 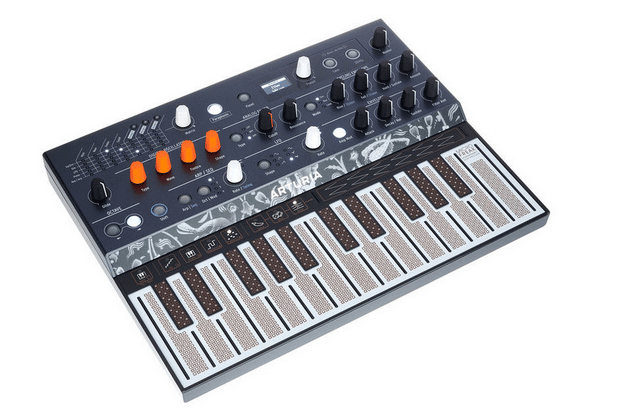 This is the latest in Arturia’s offering of synthesizers and it’s here to cater to fans of digital goodies. What you get is a digital oscillator with synthesis methods like Karplus Strong, Harmonic OSC, Superwave and Texturer. Even though it’s digital it does have an analog state variable filter. You also get an LFO with 6 modes and 2 envelopes. There is a modulation matrix with 5 sources and 7 targets so you can create some really interesting sounds, plus there is an arpeggiator AND a step sequencer with 4 automation tracks.

Being a digital synth, the Microfreak has paraphonic capabilities so you can play chords when creating your pad sound which is pretty neat. Apart from a great sound, the Microfreak can be proud of its visual representation as well and it features a rather interesting 25-key touch keyboard.

When it comes to outputs, there is a line out for 6.3mm jack and there are also CV/gate outputs on a 3.5mm jack as well. For 260 EUR, this is a powerful synth that gains on popularity with each day that passes. 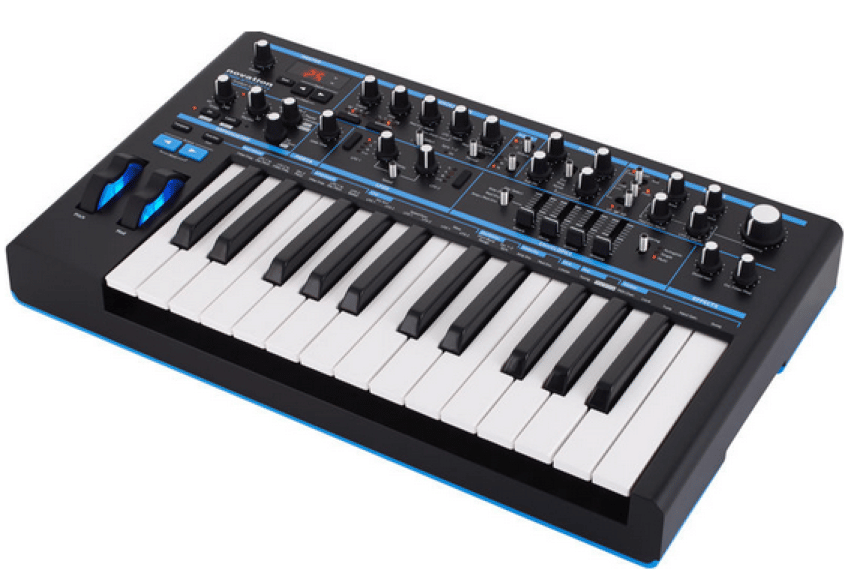 Bass Station has been around for many years and it has become a classic among EDM and Hip-Hop producers, although I know a few composers who swear by this synth. The name itself says that this is your one-stop shop for monophonic bass sounds.

Bass Station II features 2 analog oscillators plus an additional sub oscillator for an even fatter sound. Out of all the synths on this list this is the only one featuring 25 velocity-sensitive keys.

Aside from the oscillator, there are two analog filters and really flexible modulation options with two LFOs and two envelopes. The only digital gimmick in this synth is the option of saving presets and you get 64 factory presets with an addition of 64 user presets to store. Bass Station II also features an arpeggiator and a pattern-based step sequencer.

When it comes to connections, there are 6.3mm jacks for line input and output which are only mono but there is a stereo headphone jack. You can also connect a sustain pedal and there are also traditional midi in and out ports as well as a USB port.

This synth is powered via USB port (perfect for a traveling musician with a laptop) or a 9V DC power supply. For 360 EUR you get a powerful bass factory. 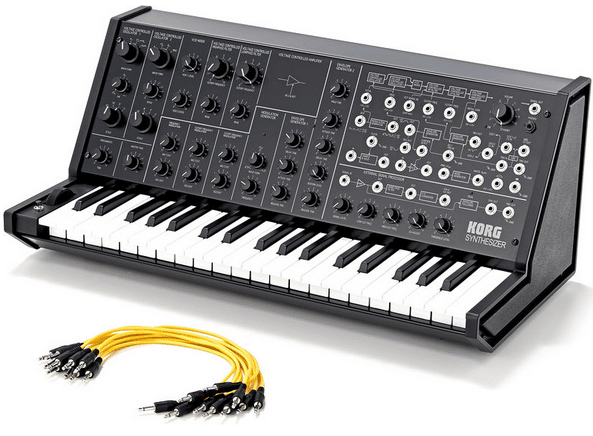 If you are a classic synth fan like most of us here at VSTBuzz, then the Korg MS 20 is a really great step up from Volca. This is a true remake of the classic MS20 synth only in a much smaller enclosure and with smaller keys, but that won’t stop you from enjoying the massive sounds this synth can create.

The MS20 is a synth that characterized a lot of the early genres of house and techno music during the 80’s and 90’s. The MS20 Mini is built with the same analog circuitry as the original. It has amazing sound design capabilities with its semi-modular design (imagine the expanded possibilities when connecting it to a Behringer Crave), and it also features an external signal processor that allows you to run external audio through the filters of MS 20 Mini.

What you also get are 2 oscillators, 2 VCAs, 2 filters and one LFO. One thing that made this synth so popular is its self-oscillating filter with distortion, so if you are looking for some rather aggressive sounds this synth will take care of that. For roughly 488 EUR, this synth is an invaluable tool for any genre of music be it an EDM hit or an ambient sci-fi soundtrack. 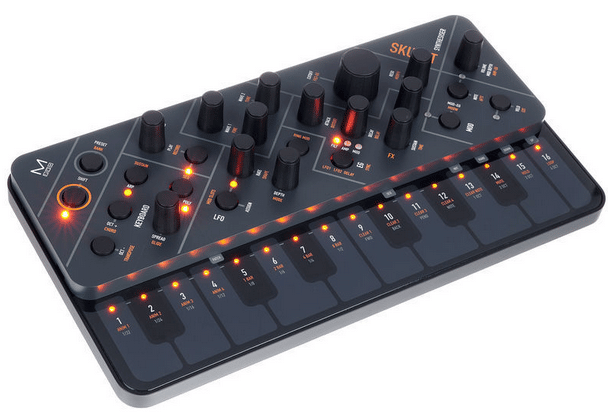 Modal Skulpt is a virtual analogue synth which means it is a hardware digital synth that emulates an analog sounding synth. It is fairly small in size, but don’t let that fool you because this is one is a behemoth when it comes to sound.

Believe it or not it has 32 oscillators to offer and you can have 8 oscillators per voice which makes this a 4-note polyphonic synth. You get a lot of oscillator manipulation options, like FM, PWM, tuning and ring modulation alongside an oscillator mixer. Unison/Spread option is also great for detuning the oscillators. The modulation matrix is a beast with its 8 sources and 37 targets. The three envelope generators and two audio rate LFOs give you a lot of tone sculpting options.

What I really like about this synth (aside from the sounds you can create) is the real-time sequencer that goes up to 256 notes and 4 parameters automation capacity, and if that’s too complex for you there is an arpeggiator for more simplicity.

Skulpt also has resonant filters morphable from lowpass to highpass and delay and distortion effects included. The memory of this synth enables you to save up to 128 patches and 64 sequence presets for you to recall at any time.

If you own a KORG Volca you’ll be happy to know that you can sync Volca and Skulpt together thanks to Skulpt’s analog clock in and out options that are compatible with KORG Volca and Teenage Engineering synths. And if that’s not enough for you there is also an option of polychain for up to four Skulpts.

Skulpt is powered either by a USB cable or 6 AA batteries. For 310 EUR there is a lot of music in this one.

This is the one that started it all for Behringer. The first time I heard about it I was rather skeptical but once I got my hands on one there was no doubt in my mind that Behringer was headed in the right direction and they have proved me right with each new model of synth they have released.

Behringer Model D is a faithful recreation of a legendary classic that is the Moog’s Minimoog Model D but a fraction of the price. This is mind-blowing for many new synth enthusiasts because you get a rather convincing clone of Minimoog at 300 EUR. This one is fully analog just like the Minimoog with its 3 oscillators with 5 waveforms, a classical 24dB ladder filter with resonance and all the bells and whistles the real Moog has. Model D also features an analog LFO, a noise generator and an overdrive circuit.

But unlike the Minimoog, the Model D is monophonic but you can polychain multiple Model D’s in order to get polyphonic sounds. What I also love about this one is that it is Eurorack compatible so you can integrate it into your modular synth setup due to its semi-modular capabilities.

Connection-wise, the Model D has two line outs with different levels, 3.5mm headphone out, a 3.5mm input for processing external sounds, MIDI in & thru, and a USB-MIDI.

To power up this bad boy you will need a 12V DC adapter which is included. If you ever wanted a Minimoog but couldn’t afford one, well you may want to give this one a chance.