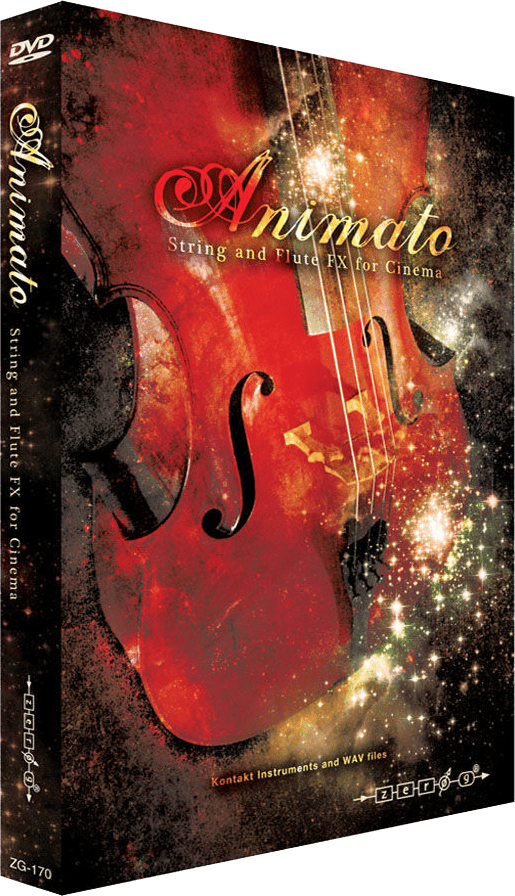 “Animato” by Zero-G is a uniquely realistic, expressive and playable String and Flute Orchestral Effects library.

With a wide sonic range from chaotic, tense effects to beautiful undulating pads. Distant pianissimo sirens can shift seamlessly to fortissimo ungodly screeches all at the simple command of your Mod Wheel.

“Animato” contains 3000 samples and 139 separate Kontakt instruments each with its own custom GUI created especially for this project and features world-class instrumentalists from the renowned Royal Liverpool Philharmonic Orchestra.

This library is perfect for adding realistic strings and woodwind effects to soundtracks, TV programmes and games but it is also ideal for contemporary commercial producers looking for authentic live sounds that give their productions a leading edge! 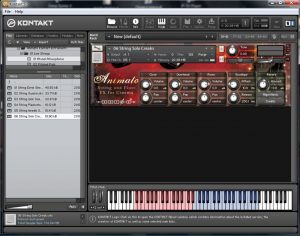 The starting point was to make this library perfect for creating soundtracks to films, TV programs and games, with a leaning towards the eerie and tortured.
However, for contemporary commercial pop/rock/hip-hop production you will also find some of the most beautiful pads you’ll ever hear. It is also ideal for contemporary commercial producers looking for authentic live sounds that give their productions a leading edge.

WHY WAS IT DONE?
It started with a problem: how can you get world class orchestral effects, that sound like a real orchestra playing, which are highly expressive, completely controllable and easy to play, and yet avoid having to pay for £10,000 recording sessions? After sifting in vain through commercially available premium orchestral sound libraries, producer Dan Graham found nothing that could fulfill all of these requirements.
And so, he set out to record his own dream orchestral sample collection – all the weird and wonderful effects he’d employed in his own live orchestral recordings – something that would be complex, alive but easily controllable with a Mod Wheel.

THE RECORDINGS
Recorded over a week in May 2010 at Liverpool’s famous Parr Street Studios (Coldplay, Genesis amongst others), four world class Royal Liverpool Philharmonic Orchestra players were heavily multi-tracked up to create 16 violins, 8 cellos, 6 flutes and 6 piccolos for that big ensemble effect.

THE PROGRAMMING
20 hours of stereo 24bit 44.kHz audio was painstakingly edited down, looped and programmed in Kontakt 3.5 over 3 months by Dan Graham, programmer Andy Flett and scripter Mario Krušelj until this beautiful library was finished and put to immediate effective use on a series of tracks for movie trailers.
Tried, tested and satisfied, the collection was then finally handed over to Zero G so that these wonderful sounds could be shared with the most demanding composers and producers in the world.

How Does it Sound?

LIVE vs MUTATED
The Kontakt Instruments are divided into two top categories – Live and Mutated. The Live Instruments present the sounds as they were recorded – no effects, pitch shifting, time stretching or other audio trickery. You should use these for realism and expensive orchestral depth. The Mutated sounds have been bent and tortured every which way – time stretched, pitch shifted, effected, reversed, distorted and so on. Being built from real orchestral recordings they always exude organic class, even when the result is distinctly synthesized.

MICROPHONE POSITIONS
The performers were recorded at 3 mic positions: close, overhead and room. You can access each of these channels from the user interface.
The mic positions each have their own character, and your blend will depend on your needs. The Close versions are great for dry, close-up intimacy. The Overhead versions have a rich, well-balanced clarity, while the Room versions are more wide and cinematic.

LARGE ENSEMBLE vs SMALL ENSEMBLE
The Live sounds are mostly presented in Large Ensemble and Small Ensemble versions – typically this will mean 6 to 16 players on the Large Instruments and 2 players on the Small Instruments. As you’ll hear, the small versions give a more intimate sound while the larger versions have more power.

The Key Features of “Animato”

NB: Requires a full version of Kontakt to run (not Player)!

What People Think About 60% off “Animato” by Zero G