EastWest/Quantum Leap “Hollywood Choirs (Gold Edition)” delivers that powerful, blockbuster choral sound that all composers seek and opens up new 3D soundscapes that will help create incredible and emotional journeys for audiences for many years to come!

Featuring a shockingly realistic female and male choir and the revolutionary Wordbuilder, this library is perfect for Cinematic Underscore, Epic Trailer Tracks, TV & Video Games and much more!

“In the past 12 years, there have been many attempts by others to improve on what EastWest/Quantum Leap achieved with Symphonic Choirs” says EastWest producer Nick Phoenix

“Small improvements were made to various aspects of choir sampling, but the emphasis has been on pre-recorded and severely limited phrases. If composers are not tired of hearing the same faux Latin phrases repeated over and over, those listening certainly are. No single choir virtual instrument has managed to deliver a fluid, intuitive and great sounding choir that was capable of singing any words in any language, soft or loud… until now.”

“Hollywood Choirs” was awarded the prestigious TEC Award for “Best Virtual Instrument 2019″ at NAMM, and is a beautifully recorded, all new, choirs virtual instrument from Doug Rogers and Nick Phoenix, the producers of Symphonic Choirs, the best-selling and most awarded virtual choir of all time.

“Hollywood Choirs” delivers that powerful, blockbuster sound that composers seek and opens up new 3D soundscapes that will help create incredible and emotional journeys for your audiences for many years to come! 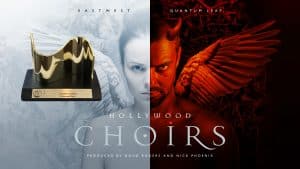 The Next Generation of Ultra-Realistic Cinematic Choirs!

“Hollywood Choirs” gives voice to a new generation of powerful cinematic vocals with unprecedented dynamics and shocking realism that unleashes a new world of choral possibilities!

Consonants and Vowels are available as separate Instruments, while WordBuilder Multis (short for Multi-Instruments) are pre-configured and ready to use with WordBuilder.

An Overview of the User Interface

Use the Navigation Bar located at the top to access all main areas (from left to right):

Hollywood Choirs delivers a powerful, blockbuster sound that is sure to excite both composers and audiences alike!

New & Improved WordBuilder – You Type It, The Choir Sings It!

“Hollywood Choirs” includes a new version of WordBuilder, first debuted in the multi-award winning EastWest / Quantum Leap Symphonic Choirs. This is the program that allows you to type in words and have them sung by a choir!

Please see below for descriptions of these new features, including many under-the-hood enhancements:

“What immediately becomes apparent with EastWest’s Hollywood Choirs – even before one engages the deep WordBuilder option – is that this is easily the best sounding choir on the market. From media composers to more traditional composers, Hollywood Choirs certainly is a front-runner for Virtual Instrument of the Year” – CDN

The Mixer & FX Rack – 13 Mic Positions Plus Everything You Need To Shape Your Sound!

The Mixer view displays a channel strip for each loaded instrument with controls for volume, panning, mute and solo, as well as buttons to access an FX Rack and to open Sub-Mixer channels for instruments with multiple microphone positions.

For Instruments that contain multiple microphone positions, a Sub-Mixer button will appear to the right of the mute, solo and FX buttons. Single microphone instrument do not display this button.

The Microphone Array is located in the center of the Hollywood Choirs UI, and displays the microphone configurations used in each of the 5 Mixes.

Note: The Gold Edition of “Hollywood Choirs” included in this deal features the Main Microphone Mix ONLY, but you will be eligible to upgrade to the full Diamond version by simply visiting the Soundsonline site after purchase HERE.

The 13 microphones used in the recording of Hollywood Choirs is shown below, broken down into their respective microphone mix configurations:

So What Exactly Can I Do With “Hollywood Choirs”?

EastWest/Quantum Leap’s “Hollywood Choirs (Gold Edition)” is the very definition of that epic Hollywood choral sound! Featuring a blockbuster female and male choir with unprecedented dynamics, plus the ability to have them sing the words of your choosing with the revolutionary Wordbuilder, this library is well suited to the following music genres

Full of inspiring vocal performances, this library will instantly transform your next project into a cinematic masterpiece!

This library runs in EastWest’s PLAY 6 Software (earlier PLAY versions are NOT supported with this library).