EastWest are probably one of the world’s most prestigious and acclaimed producers of virtual instruments and sample libraries. Being one of the very first companies that ever ventured into deep orchestral sampling,

EastWest has led the industry for 30 years now. Used by the who is who of producers in the music, film, TV and games world, EastWest provides professionals with some of the best and most comprehensive music creation tools on the market.

With the “Cinematic Vocal Bundle” you get access to two of their incredible libraries that provide everything you need for modern Operatic & Ethnic vocal scoring:

“Voices Of Opera” includes the following:

“Voices Of The Empire” includes the following: 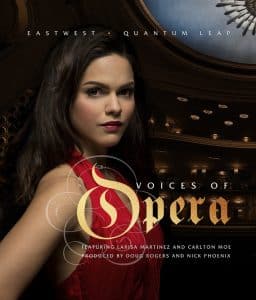 VOICES OF OPERA is perfect for any composer looking to add a pristine operatic sound and fits in perfectly with EastWest’s recent slate of award-winning vocal products HOLLYWOOD CHOIRS, VOICES OF THE EMPIRE, and VOICES OF SOUL.

LARISA MARTINEZ has established a strong and unique presence in the classical performance world. She’s currently performing with opera titan Andrea Bocelli as his principal soprano on his world tour. She is a winner of the Metropolitan Opera National Council Audition PR district 2016, where she also received the Angel Ramos Foundation Award and Audience Prize.

Heralded by the New York Times as an “ardent tenor”, CARLTON MOE is currently performing as Ubaldo Piangi in Andrew Lloyd Webber’s Phantom of the Opera, the longest running show on Broadway. His opera credits include Lakmé (Gerald), I Capuletti e I Montecchi (Tebaldo), The Mother of Us All (John Adams), Ernest Bloch’s Macbeth (Malcolm), and Roméo et Juliette (Tybalt).

VOICES OF OPERA is a 40GB collection of 229 multi-sampled vocal instruments across various categories, including:

Voices Of The Empire

“Voices of the Empire is truly stunning. The sounds are impeccably recorded, wonderfully useful and remarkably creative.” – AskAudio

A cinematic and ethnic vocal tour-de-force. EastWest/Quantum Leap presents VOICES OF THE EMPIRE, a brand-new vocal product that is perfect for epic film/TV/game soundtracks, EDM, or any music requiring solo vocals or vocal harmonies using chords. Featuring the raw, primal vocals of Uyanga Bold, VOICES OF THE EMPIRE is the perfect companion product to the newly-released blockbuster HOLLYWOOD CHOIRS.

Uyanga Bold is a unique talent, melding the ethnic musical traditions of Bulgaria, Serbia, Mongolia, and beyond. She is a trained opera singer with perfect pitch, fluent in Russian, Mongolian, French, English, and German. It’s East meets West like you’ve never heard before. Her voice is beautiful, pure, otherworldly, haunting, unsettling, powerful, genuine in its ethnic flair and world class in its precision.

Uyanga Bold has taken the world by storm since she appeared on the scene, recently touring with Hans Zimmer with his live performances of the score from The Dark Knight. Forbes Magazine wrote “her voice harkens back to ancient civilizations” and she has been nominated as “Female Singer of the Year”. She has appeared internationally on television, radio, and in live performances, reaching over 25 million views across all platform.

Features of VOICES OF THE EMPIRE include:

VOICES OF THE EMPIRE features 84 instruments across a variety of categories, including: 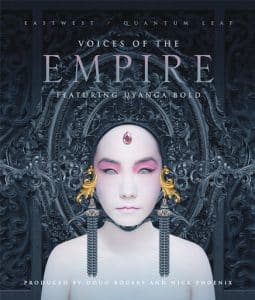 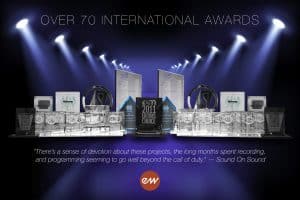 As with all of EastWest’s sampled products, VOICES OF OPERA and VOICES OF THE EMPIRE are libraries powered by the brand’s very own PLAY engine. PLAY 6 is a powerful, free sample engine similar to Native Instruments’ KONTAKT. The sampler was specifically designed for use with EastWest’s PLAY libraries.

The PLAY engine was recently updated to version 6 which brought many improvements and enhancements such as:

So What Exactly Can I Do With “Cinematic Vocal Bundle”?

“Cinematic Vocal Bundle” is quite possibly one of the best Virtual Opera & Ethnic Vocal collections you can buy for the price.

Featuring the sensational operatic vocals of soprano Larisa Martinez and tenor Carlton Moe, plus the raw, primal, haunting vocals of Uyanga Bold this is a collection that is ideally suited to the following music styles:

Thanks to the free “Play” engine, you don’t need to buy the full version of Kontakt or any software to run it either!

Both of the libraries in “Cinematic Vocal Bundle” feature innovative and powerful scripting giving instant access to features such as legato, phrases, combos, sustains and keyswtiches.

This bundle is a must have compositional tool for serious composers!

Note: These libraries require you to create a free iLok account HERE, however you DO NOT need to own a physical key!