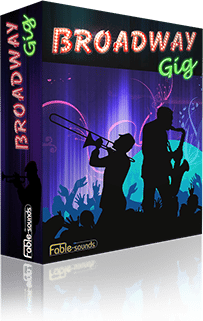 62% off “Broadway Gig” by Fable Sounds

“Broadway Gig” – Created specifically for keyboardists playing live shows, this most affordable product in the Broadway series is a powerhouse!

With 8.6 GB of audio content and 12,952 unique samples, whether you play Funk, Rock, Pop, Blues, R&B, Latin, Hip-Hop, Jazz or Reggae, this virtual instrument is perfect for playing live shows of any scale!

5 reviews for 62% off “Broadway Gig” by Fable Sounds

“Broadway Gig” is redefining what a keyboardist can do on the stage, and on a budget. It includes the segments which are most useful for playing live shows, taken straight out of Fable Sounds’ critically acclaimed flagship product – Broadway Big Band.

This library features 4 wind instruments that have been deeply sampled and lovingly scripted for the ultimate in live playability:

You can use any of the Broadway Gig instruments multiple times in the arrangement or in a multi, creating a realistic section of multiple instruments. Each of the 4 instruments can simulate up to 5 instances of itself even when playing in unison, without sacrificing realism.

Each of the instruments comes with the microphone setup most optimized for fitting perfectly in the PA mix, creating the sonic illusion that there is a live horn section on stage!

Best of all, Broadway Gig It works in Kontakt 5 or newer, and in the free Kontakt Player 6, which you can download HERE.

“I’m not sure what voodoo / black magic they did to get it to sound like that, but it is unreal how real it actually sounds” – Assaf Rinde (Composer for film, TV, video games etc.)

“Sound fat”; “very responsive”; “Its a great product. I recommend Broadway Gig for everyone” – Joey Melotti (Singer Songwriter and keyboardist for Barry Manilow

“I used Broadway Big Band in live shows with Paul McCartney, Bobby Kimble, Paul Simon, Danny Seraphine…” “It helps when you have a great library like Broadway Big Band. That makes my life much easier” – Robert Luna (keyboard player)

“This is the most amazing tool I’ve ever come across for being able to do brass arrangements.” “Its just amazing how realistic and clean the Broadway library sounds, and its definitely changed the way I work” – Rob Arbittier (Composer & Music Producer – former programmer for Stevie Wonder)

“Wow! That’s realism! “ “I love the spread of the horn section. I love how you can detect the individual elements.” – Thomas Dawson (Keyboardist and MD for THE COMMODORES) 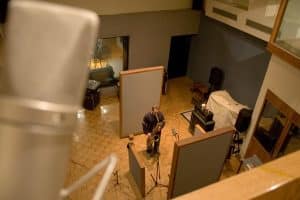 Fable Sounds have developed and patented a unique and intuitive articulation switching system that enables real-time access to all of the articulations of an instrument from a single patch.

Broadway Gig offers incredibly powerful yet simple to learn and use features, including all of the following:

… and this is just the beginning.

This groundbreaking feature enables polyphonic, polyrhythmic legato across a mixed section of instruments. Using RTO you can play an entire section on the keyboard, and the notes you play are orchestrated in real time and distributed to the various instruments in the RTO multi, based on orchestration schemes that you can create yourself.

This is an extremely powerful system which is extremely easy to use. Great for live shows, as well as tracking under tight deadlines. It also offers articulation presets which can replace the built-in key-switching with alternative midi triggers such as foot-switches, freeing your left hand for playing notes rather than key-switches.

The feature is not some kind of a doubling effect, but rather it uses different samples, and performs slight adjustments to make sure each instance of the instrument sounds a little different from the other. The results are very realistic. The feature also includes “Humanize” and “Detune” knobs for further control over the section sound.

“Notation mode” enables notation programs to communicate with Broadway Gig and use it for playback of scores, including all included articulations and dynamics. Notation mode also enables integration with Cubase expression maps.

Broadway Gig’s Notation Mode uses an alternative system of key-switching that is more in line with the way notation programs operate. (full documentation in the user manual).

Due to the extended dynamic range of the instruments included in Broadway Gig, it is sometimes difficult to keep dynamics under control when using a MIDI keyboard’s velocity.

To help overcome this, there’s a knob to control the velocity curve, which helps to adjust the responsiveness of the Broadway Gig instruments to various MIDI keyboards. The velocity curve control feature can also be MIDI automated to make changes within a song as needed. 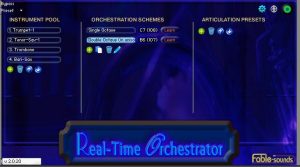 It sounds right and feels right because it was played right, by accomplished New York Jazz, Salsa, Pop & Funk musicians. It’s the real deal from top to bottom.

So What Exactly Can I Do With “Broadway Gig”?

Delivering supreme content and groundbreaking technological innovation, “Broadway Gig” has been developed for the gigging musician who wants to bring the biting and powerful sound of a kick ass live horn section. The term “lean and mean” is truly the best description of Broadway Gig.

With its authentic sound and powerful performance features this library is perfect for but not limited to:

Note: Broadway Gig works in Kontakt 5 or newer, and in the free Kontakt Player 6, which you can download HERE.

62% off "Broadway Gig" by Fable Sounds