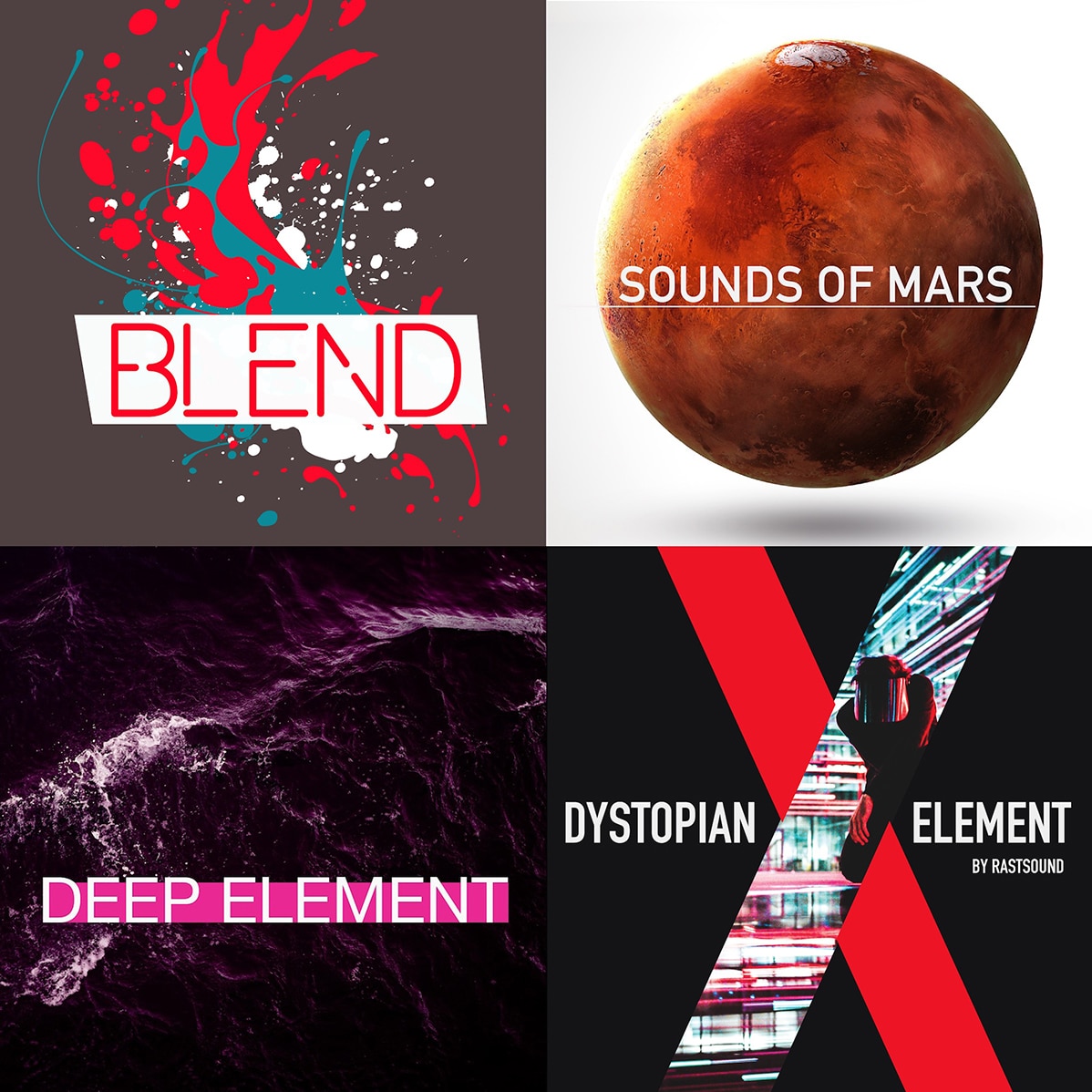 “Creators Collection Bundle” consists of 4 completely unique instruments, each with its own unique sounds and control features… from blending and morphing organic and artificial sounds to exploring mesmerizing ambiences, atmospheres, drones, soundscapes and more…

Each instrument has been pristinely recorded and lovingly scripted to bring you many hours of joy in your musical explorations.

When you need something that sounds slightly off-beat or even completely out of this world for your latest project, these libraries will deliver! 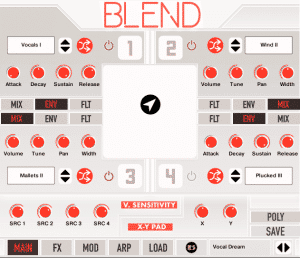 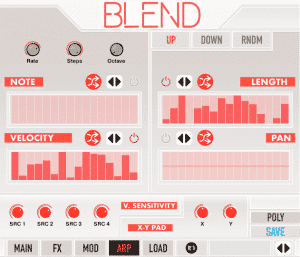 Blend – Create Something Unique, Then Play & Morph It In Real Time!

Is it hard to design unique and realistic sounds? Not with “Blend” in your arsenal!

Rast’s new Kontakt based engine, “Blend”, comes with 4 modules through which you can mix, design, play and morph multi-sample instruments and create endless realistic sound colours. Easily design a timbre in between a guitar, piano and a synth, then morph while playing!

You can load keys, strings, vocals, plucked, synths, bass, winds, textures and more; then morph from one to another.

72 INSTRUMENTS IN EACH MODULE

Design a sound, save and use it in every project. Our sound designers created 97 unique patches (hear some of them in the example videos) ready to inspire you to play or further design!

HOW BLEND WILL HELP YOUR WORKFLOW?

You can load all sorts of instruments to each module, edit them individually, blend 4 instruments and further shape, morph and play.

The awesome thing about this engine is that you can finally mix rare world instruments with analog synths or keys, design wild mallets on the go, and on and on…

In addition, you can go very deep into one category as well. For example you can build a strong analog synth sound mixing various synths and strings.

The possibilities are endless!

Want to learn more about why Rast built “Blend” & how it can help your workflow? – Read more about their philosophy here.

Designed collaboratively by Rast Sound and 20+ professional Sound Designers, “Sounds Of Mars” comes with a wild engine that can even play itself (the future is here)!

A POWERFUL YET EASY TO USE INTERFACE

From top to bottom you can see the instrument is set up with several knobs that give you access to the following FX controls:

These controls are tied to predetermined LFOs that the Rast Sound team has programmed into the instrument. A simple tweak of these controls can add movement and intensity to playback, although the outcome may surprise you as the FX controls will alter each of the samples in playback.

A GALAXY OF SOUNDS TO CHOOSE FROM!

In use, the library can be used to load up 2 different sets of samples with the pull-down menus for left (melodic) and right (sound design) presets.

The Auto Play is a simple button that randomly loads different sample sets from the Sounds Of Mars collection and plays back a demonstration of the 2 presets at once. This feature cycles through different random combinations making it an excellent way to preview combinations.

AN INSPIRED COLLABORATION BETWEEN RAST SOUND & OVER 20 TOP SOUND DESIGNERS!

“You want to wake up in the morning and think the future is going to be great – and that’s what being a spacefaring civilization is all about. It’s about believing in the future and thinking that the future will be better than the past. And I can’t think of anything more exciting than going out there and being among the stars.” – ELON MUSK 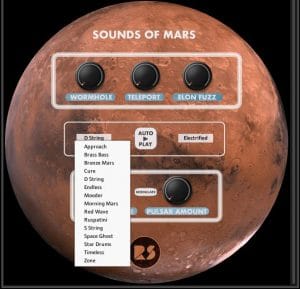 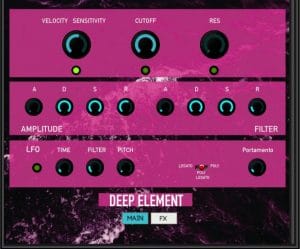 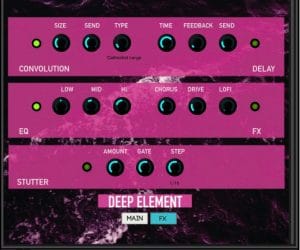 Inspired from names like Nils Frahm, Olafur Arnalds & Kiasmos, Rast Sound have built a unique library for you to go deep. With solo instruments, patterns, long recordings & soundscapes, “Deep Element” is the largest library and the last addition to their mood creator Elements Collection.

They designed this library with co-producer Dann Michael Torres, who provided a deeply inspiring and awesome sounding set of source tracks, designed for film and game composers as well as deep EDM folks. The sounds provided include the following:

Deep Element offers multi-sample solo keys, strings, percussions and sound design instruments which are built to easily compose tracks with a deep mood. The solo instruments work well together allowing you to compose for this mood with only Deep Element’s tools.

Inspiration is key to music making alongside with control. If solo instruments are control for a composer then patterns are flames of inspiration that can easily start a track, spice up or change direction in ongoing work. With this in mind, Rast Sound prepared patterns for various tones so you can start building tracks or inject some new feel or subtle rhythmics immediately either for film, game or EDM context.

Rast Sound have created more than 70 ready to go loops, melodic & harmonic triggers to stylish noise elements. You can embellish your beats with solo instruments, patterns and long recordings.

Rast Sound have also provided you with a seriously large set of long source mixes/tracks produced by Dann Michael Torres, on which this library is based. Either use them as they are… setting deep, ambient moods/scenes in the blink of an eye or go surgical on these long and constantly changing, moving scapes and derive your bits of inspiration…

Dystopian Element is a dark guitar odyssey featuring multiple guitarists playing through analog equipment; then further processed and edited by Rast Sound to bring you a dark dystopian sound palette in the form of playable Kontakt presets, recordings and patterns.

A FANTASTICAL TRIP INTO A DARK, SCI-FI WORLD!

Inspired by the likes of Black Mirror & Blade Runner 2049, you will find playable multisample instruments (presets) for Kontakt alongside with a plethora of long takes, ambiences, patterns, noises and hits in this library.

Rast Sound focused to create a unique, organic sound & instrument collection especially for film & game composers. There are 20+ playable multisample presets in total in this collection and we’re sure you will find that they provide a great jumping-off point for your own explorations in to the art of dark sci-fi scoring!

This library is inspired from & co-produced by Federico Coderoni’s recordings and scripted by Katerina Mantzari.

A POWERFUL YET EASY TO USE INTERFACE

The unique Kontakt GUI provided gives you plenty of scope to further shape and mould the sounds to your liking using a number of powerful functions and effects spread over 2 individual tabs. 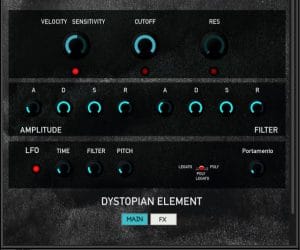 So What Can I Do With “Creators Collection Bundle”?

“Creators Collection Bundle” consists of 4 completely unique instruments, each with its own unique sounds and control features… from blending and morphing organic and artificial sounds to exploring mesmerizing ambiences, atmospheres, drones, soundscapes and more…

These are libraries that are capable of covering many genres but are particularly good for:

NOTE: These libraries require the FULL RETAIL VERSION of Kontakt (NOT compatible with the free Kontakt Player) – Please read the individual instrument sections for exact requirements! 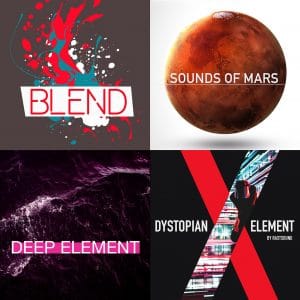