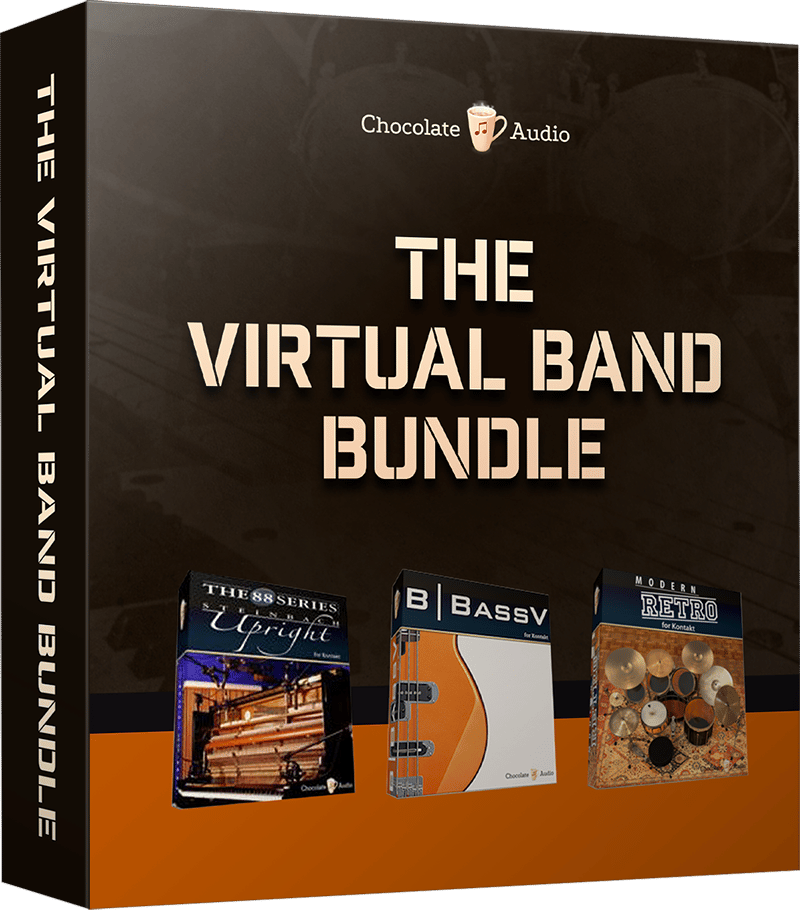 70% off “The Virtual Band Bundle” by Chocolate Audio

“The Virtual Band Bundle” is a unique collection of classic songwriting instruments redefined and brought up to date with the latest in modern sampling techniques.

From the beautiful tone of the “Steinbach Upright” through the 90’s flavoured “Modern Retro Drums” and the pure 80’s coolness of “BBassV Electric Bass”, you’ll find a sound that’s perfect for every songwriting occasion!

When it comes to writing songs that capture the classic styles of yesteryear, nailing the sound is often the hardest challenge any songwriter/producer can face.

Fortunately Chocolate Audio have you covered with their incredible “Virtual Band Bundle”, which brings together three of their finest vintage sampled instruments, all authentically recorded live using a range of vintage mics.

The clever Kontakt scripting for each instrument just adds to the joy ensuring you’re never taken out of the “moment” and can just concentrate on creating great music!

NB. NOT compatible with the free Kontakt Player! 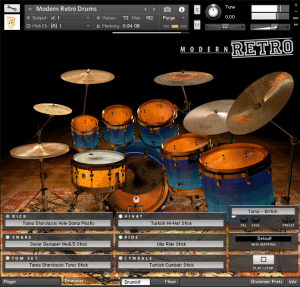 The kits come with 4 sets of cymbals sampled from a Zildjian set (sticks and hotrods) and a Turkish set (sticks and brushes) and additional Cymbals (Sabian and Ufip) and 6 snares from Ludwig, Sonor and Tama, presented in 13 different versions.

These kits have been largely used since the ’90s to craft some of the best selling music ever recorded.

After a through analysis of the best selling singles from the 90s we realized, contrary to our belief, that drums featured a rather large real room sound, even if sometimes very low in the mix. So we opted for an historical room in Italy that is not operating anymore as a recording studio. When we were granted access to this space, we had just a few days to setup and capture the drums.

Another recognizable sign in music of the ’90s is the importance in the mix given to the kick: if the ’80s saw loud snares, the ’90s where all about kick sounds, mixed rather up front and with a lot of work on both the “click” and bottom of the kick sound. For this reason, we opted for an extensive use of microphones on the kicks and we prepared the two kicks we had at disposal in no less than 13 different ways.

The 6 snares offer a range that goes from piccolo snare to lowly detuned and muted either using a cloth or various damping materials, resulting in 13 very usable sounds.

Even if slightly different in regard to recording technique, the single drums from each kit can be easily mixed since they share the same room, mics and positioning in the room.

Drummer For Kontakt – A Custom Engine

Developed over two years by Chocolate Audio, the user interface is thought out to be easy and quick to learn and use while featuring the power-user tools some of us love to tweak when working with drums.

Derived from a Yamaha BB415 5-string electric bass, the BBassV Electric Bass comes after several years of R&D by Chocolate Audio and sets a new benchmark in terms of playability and sound.

The concept behind the BBassV is to make playing a bass line via a MIDI keyboard simple again. Gone are the days when we needed to learn by heart tons of key-switches to craft a convincing track. With all of this left brain data we constantly run the risk of losing creativity and musicality in the process.

The only three available key-switches allow you to switch on the fly between Fingered (C0 via MIDI), Mute (D0) and Harmonics (E0).

The Slide engine is the door to the life-like slide-to articulation: just play on the MIDI keyboard with two consecutive notes spread more than 3 semitones and making the second overlap the first and the magic happens. This articulation works at any BPM and you can even switch between two different BPM-synced durations via Velocity. Pressing the Sustain Pedal will make, by default, all overlapping notes play with a Slide technique, regardless of interval. This setting can be reversed and applied to the Legato technique if one wants to.

Fretting* is often overlooked, but it’s one of the main reasons the same bass can sound very different when played by different players. BBassV comes with 12 different fretting styles: 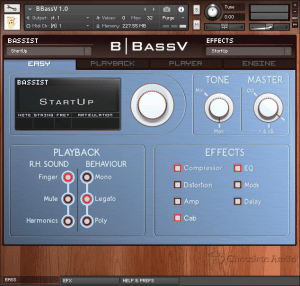 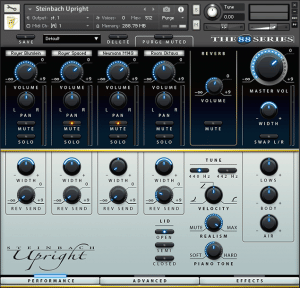 When Chocolate Audio chose to create this Kontakt instrument, they carefully chose which upright piano to start from. They wanted a piano capable of producing both a full sound and the shallow on the edge of being out-of-tune tone characteristic of so many historical recordings. They sampled a beautifully made Italian upright piano built by Steinbach in Torino and placed it in a mid-size roomy studio surrounded by a plethora of microphones.

We didn’t settle for a single pair or a limited selection of microphones from the start, we wanted to make sure that the piano, after the sampling and editing process had the best chances to preserve its soul, something which can be hard to achieve.

The Mics used were carefully selected after multiple playing and listening sessions on the edited samples and consist of the following: Two sets of Royer R121 matched-pairs, A Neumann M149 tube mic and a pair of matched Oktava MK101 capsules.

These microphones, by themselves or combined, give you the widest possible gamut of tonal colors you might imagine in an upright piano. To preserve tonal balance, we even carefully phase-aligned all of the microphones.

Dealing with a piano Instrument featuring four microphones at the same time can bring an heavy load on system resources. The amount of playback voices for the CPU and Disk Streaming, preload in RAM and load times could suffer. A click on Purge Muted simply removes from memory all muted channels, not anymore weighing on RAM, CPU and streaming resources.

Steinbach Upright eliminates the need to spend hours looking for the right sound, just select one of the 23 main Presets and fine tune it using a few carefully selected parameters.

The Compressor & Tape Emulation section features no less than 22 presets with a simple Amount knob to tune it to your taste.

The Reverb section features a collection of 17 carefully selected high quality Impulse Responses from both real spaces and vintage and contemporary studio hardware.

The Key Features of “The Virtual Band Bundle”

NB: FULL VERSION OF NI KONTAKT 5.5.2 REQUIRED! THIS PRODUCT IS NOT COMPATIBLE WITH THE FREE KONTAKT PLAYER

70% off "The Virtual Band Bundle" by Chocolate Audio