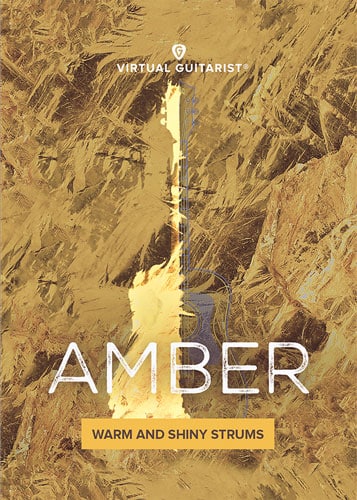 70% off “Virtual Guitarist AMBER” by Ujam

Create beautiful sounding acoustic guitar tracks within your DAW quickly and without any prior guitar skills.

20 reviews for 70% off “Virtual Guitarist AMBER” by Ujam

“Virtual Guitarist AMBER” is a unique virtual guitar instrument that is suitable for all levels of music production experience.

Seasoned musicians and composers will be impressed with Amber’s time-saving features and uncompromising sound quality whilst beginners will appreciate the frustration-free design, speeding up workflow and enhancing the creative process.

From complete beginners who are just starting out to top professional composers working to tight deadlines, AMBER is ideal for anyone who wants great sounding acoustic guitar tracks with minimal fuss.

Ujam’s emulations of hand-picked vintage amps and speaker cabinets ensure classy tone and vibrant character whilst the in-built effect and tonal control make it simple to dial in your perfect sound and craft your next hit!

Virtual Guitarist AMBER is optimized for one clear, powerful purpose: To produce great-sounding guitar tracks without distracting you from the complex endeavor that producing a song is. 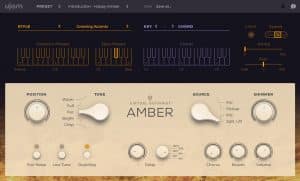 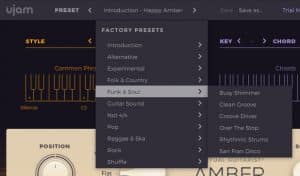 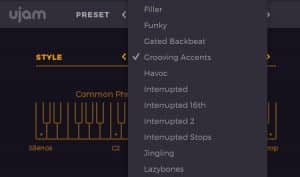 What Is Virtual Guitarist AMBER?

“Virtual Guitarist AMBER” is a software instrument doubling as a professional guitarist in a music studio, with you being in the producer’s chair.

In these and many other scenarios, “Virtual Guitarist AMBER” is a great alternative to the real thing.

What is “AMBER” about?

Virtual Guitarist AMBER focuses on strummed chords on a premium acoustic steel string guitar, a rhythmic staple in any kind of modern music. It offers you a wide range of playing styles (Phrases combined into Styles) and sound characters from full-bodied and warm to brilliant and shiny.

There’s a wide range of functions of an acoustic steel string guitar in a song. Two extreme examples:

Virtual Guitarist AMBER lets you do all this and much more in no time, with minimal effort.

It combines the virtues of a professional guitar, a custom premium quality acoustic guitar, perfectly tuned, with fresh steel strings, recorded with a professional microphone and a pickup at the same time, plus the most important sound shaping tools as used in recording studios, to design the guitar sound exactly as you need it in various contexts.

Ujam are all musicians and they know that the time for learning a user interface is better spent making music. Therefore, the user interface of Virtual Guitarist AMBER is designed for maximum ease of use and minimum distraction.

The top half of the Virtual Guitarist AMBER window is dedicated to the guitarist’s performance – in other words: what is played. Here, you’ll find two musical core aspects you can control: Phrasing and Notes.

If you know these things and can switch presets, you know all you need to start producing with Virtual Guitarist AMBER.

Let’s look at the bottom half of the Virtual Guitarist AMBER window. Here you set up your guitar, its sound, character and effects.

The interactive keyboard is both a display of received MIDI notes and an actually functional on-screen keyboard. The left side of the keyboard doesn’t make any sound by itself. Here, you control the performance of the guitarist by switching between 34 different phrases. 11 of these phrases are set by the style, the rest are always available.

The lower left of the MIDI keyboard (C#1 – B2) is reserved for a collection of so-called “Common Phrases”. These phrases are “hard-wired” and won’t change with the STYLE selection. Common Phrases complement the Style Phrases by phrasings that are more generic and applicable to multiple contexts.

Keys in this area select phrases of the currently selected Style. Phrases in the Style Range start with the lowest density/intensity on C3 and get more agitated as you move towards Bb3.

Keys in the Chord range function almost like a regular musical keyboard: You start and stop the guitarist’s performance and you determine the chords played. It’s like playing keyboard, except that instead of playing notes you select the chord the guitarist will perform as a phrase.

Performance controls let you adjust the musical performance of Virtual Guitarist AMBER to your song’s feel and tempo.

FEEL – You can tweak the feel of your guitarist’s performance either towards relaxed or rushed using this control:

This area is where you tweak the sound of your guitar. Virtual Guitarist AMBER offers a large range of sounds from warm, soft and round to brilliant and sparkling.

The three knobs underneath the POSITION control allow you to add typical Fret Noise, to re-tune or to duplicate the guitar

Ujam strongly encourage you to use your go-to audio processing tools when perfecting your guitar tracks. However, in order to save you time and create a more interesting range of instantly accessible presets, Ujam have included the three most important effects right on board: delay, chorus and reverb. 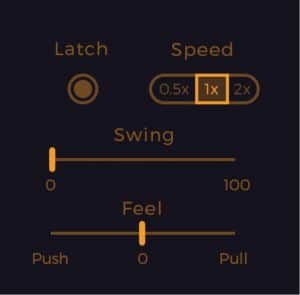 So What Exactly Can I Do With “Virtual Guitarist AMBER”?

“Virtual Guitarist AMBER” is a true team player that doesn’t hog the limelight, it is perfect for Pop, Rock, Funk, Folk Country, Reggae and Ska – no guitar skills necessary!

Important Note: This plugin is NOT compatible with macOS 10.16 (Big Sur)

Note: Please be aware you will be required to visit the Ujam website in order to redeem and download your product, we do not host the plugin download at VSTBuzz.

70% off "Virtual Guitarist AMBER" by Ujam

What People Think About 70% off “Virtual Guitarist AMBER” by Ujam