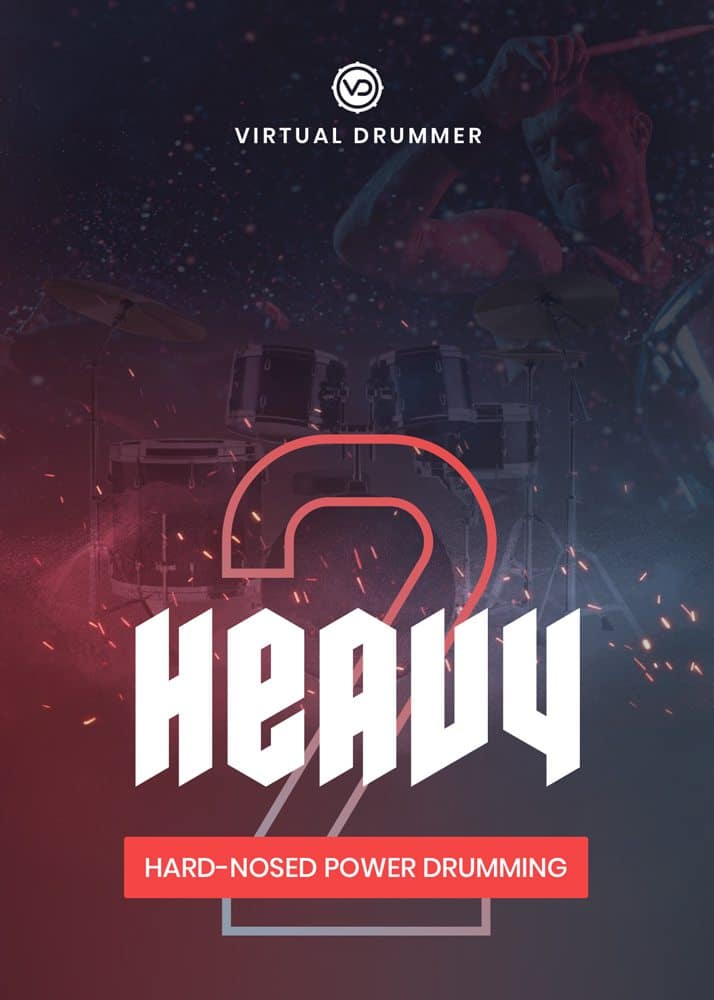 71% off “Virtual Drummer HEAVY” by UJAM

Always delivering what its name promises, HEAVY punishes the drums with relentless weight and energy behind each hit, driving your tracks forward and providing the perfect basis for all manner of rock, indie and grunge styles!

7 reviews for 71% off “Virtual Drummer HEAVY” by UJAM

“Virtual Drummer HEAVY” is a heavy hitter in the literal sense, punishing the drums with relentless weight and energy behind each hit. Heavy drums, lots of punch and presence in the mixes!

Seasoned musicians and composers will be impressed with HEAVY’s time-saving features and uncompromising sound quality whilst beginners will appreciate the frustration-free design, speeding up workflow and enhancing the creative process.

HEAVY comes with 200 presets and 60 styles with 1380 rhythm patterns played on 5 drum kits covering any musical genre that benefits from high energy rock drumming. Utilise the professional performances to finish your tracks in record time or drag and drop the MIDI information into your DAW for ultimate artistic control.

Choose from sophisticated microphone setups and channel strip combinations with the Character control. Enhance your mix further by selecting custom drum combinations and sending individual drums to separate audio tracks in your DAW.

The comprehensive Master Section allows for the global control of compression, saturation and a selection of ambience/reverb styles. 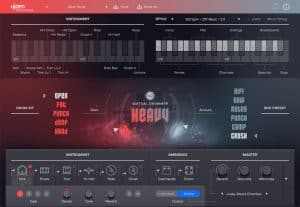 What Is Virtual Drummer HEAVY?

“Virtual Drummer HEAVY” is a software instrument doubling as a professional drummer in a music studio, with you being in the producer’s chair.

We are all musicians and we know that the time for learning a user interface is better spent making music. Also, unlike many virtual drum instruments, UJAM do not expect their users to bring in-depth knowledge about drum kits, microphones, and sound engineering – because let’s admit it: We can’t possibly know everything.

Therefore, the concept and user interface of Virtual Drummer are designed for maximum ease of use and minimum distraction. There is a lot of intelligence going on under the hood so you can focus on your music.

The user interface is also fail-proof in that no matter how you set up the controls of Virtual Drummer, the result will never be musically or technically wrong – and this is true without sacrificing any creative freedom.

You can trust in the fact that tracks produced with Virtual Drummer are realistic, professionally produced drum tracks.

Before we look at things in more depth, let’s first explore how to play Virtual Drummer, as that may be all you need for now.

Look at the top half of the Virtual Drummer window. It is dedicated to the Drummer’s performance – in other words: What and how your session drummer plays.

Look at the interactive keyboard first – the left half plays the individual instrument, the right half phrases and grooves.

If you know these basic things and can switch presets, you know all you need to start producing with Virtual Drummer!

Playing Virtual Drummer & Building Songs With The Easy To Use GUI

As with every UJAM product, HEAVY benefits from their frustration-free design philosophy meaning anyone can use this product to make music faster, better and easier, regardless of their music production experience level.

The Interactive Keyboard is the heart of Virtual Drummers’ performances. Here you can:

The left half of the Interactive Keyboard shows you which keys play which drum instrument. Playing individual instruments is only necessary if you want to program your own drum tracks or if you want to manually add extra hits to a performance created by Virtual Drummer.

Using the right half of the Interactive Keyboard or the corresponding MIDI notes, Virtual Drummer can play entire drum performances.

Styles are broken down into Song Parts: You got Intros, Verses, Choruses, Breakdowns, Fills, Endings, and bonus parts called “Special”.

In this menu, you can select one of the 60 Styles by either clicking a name and opening the menu, or by using the arrows to step through the list. Each Style features 23 individual Song Parts that are displayed on the right half of the Interactive Keyboard.

Song Parts & How to Play Them

Virtual Drummer will automatically play Crash cymbals when it falls back from a Fill into a Looped Part.

Virtual Drummer lets you drag Song Parts from the Interactive Keyboard into any track of your DAW, where it will be converted to MIDI notes. You can edit these MIDI Song Parts just like any other MIDI sequence – e.g. change note positions, velocities, or add instruments. 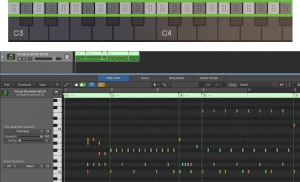 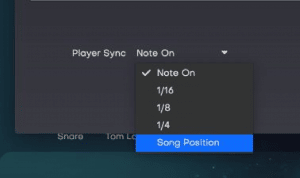 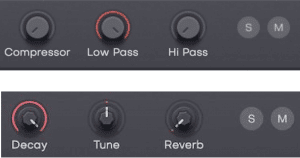 For each instrument (Kick, Snare… ) or group of instruments (Toms, Rides, Crashes) within Virtual Drummer there is an instrument channel that lets you adjust volume and other parameters individually.

Like the Instrument Channels, Ambience Channels can be selected, adjusted in volume, soloed/muted and sent to individual outputs. On top of that, they have three built-in audio processors allowing you to shape the Ambience signal.

You can choose to send any Instrument and Ambience Channel either to the Master Section (default) or to an Individual Output that will be fed to an Aux bus in your DAW.

The order in which Channels are sent to the DAW is fixed as follows: Master, Kick, Snare, Tom, HH, Ride, Crash, Overheads, Room

This section is designed to provide you with the maximum control over the sound with a minimum set of controls – but don’t be fooled: under the hood, you’re programming a fully-featured mixing console with channel strips, busses and insert processors.

Each Mix Preset is a total recall setting for the internal mixing console. The Presets are selected and named specifically for the genre of your Virtual Drummer.

So What Exactly Can I Do With “Virtual Drummer HEAVY”?

“Virtual Drummer HEAVY” is a true team player that doesn’t hog the limelight, it is perfect for all genres from soft pop rock ballads to Seattle-style overdrive grunge – no drumming skills necessary!

71% off "Virtual Drummer HEAVY" by UJAM

What People Think About 71% off “Virtual Drummer HEAVY” by UJAM