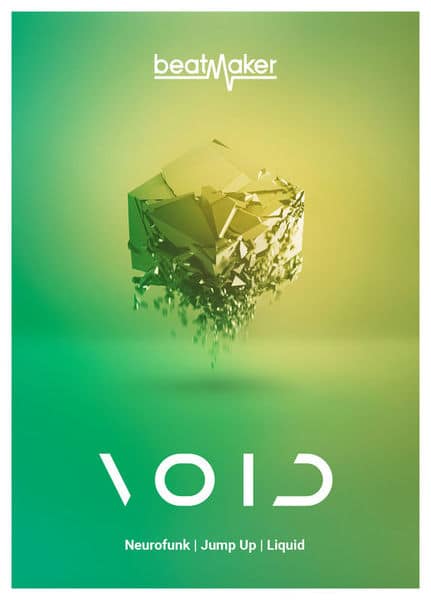 Beatmaker Void combines the styles, grooves and sounds typical for Drum & Bass, giving you full dynamic and sonic control over the result.

Breaking the limitation of loops, a Beatmaker VOID offers you the musical flexibility of a drummer, putting you into the producer’s chair!

“Beatmaker VOID” gives the tools to create the perfect breakbeats without the need for samplers, beat slicing or monotonous rearranging. With just a few notes you can craft the perfect fills and breakdowns to make your fans scream with delight!

VOID is the perfect tool to glue together your dirtiest leads, smoothest pads and thumping basslines! 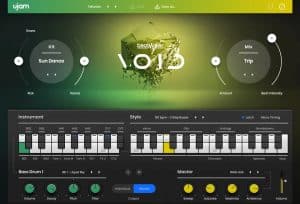 The Fast Track From Bedroom To Club

You don’t need to spend hours getting the balance of your kick and snare right, changing one sample only to find you need to re-do the entire rhythm. With VOID, you can touch a single key and nail the sound you want from the get-go.

It instantly syncs to your DAW’s tempo, and with only a few notes you can craft the perfect fills and breakdowns to make your fans scream with delight.

Straight hard-hitting beats don’t always get the job done. Sometimes you need that heavy syncopation you only get in liquid, jungle, and neurofunk.

VOID gives you the tools to create the perfect breakbeats without the need for samplers, endless beat slicing or monotonous rearranging.

Melt The Faces Of Your Audience

VOID has all the rhythms you could possibly need. But if you want to take a stab at creating your own from scratch, every kit lets you trigger individual drum hits at will.

Whether you choose to use the presets as-is or play in your own rhythms, you’ll be ready to create beats that melt the faces off your audience.

Let VOID give you a starting point, then simply take over the moment inspiration strikes.

Even if you’ve never created DnB before, VOID’s transparent interface makes it easy to create crazy bangers without overthinking it. No hidden menus or obscure controls, and everything is clearly laid out for you.

How Is Beatmaker VOID Supposed To Be Used?

Think of UJAM Beatmaker VOID as a toolkit filled with a limitless arsenal of tools. For each groove there is a wide array of variations that help turn your song into a dynamic piece of music.

You can use one of the less complex variations (phrases) at the start of a song. After eight or sixteen bars you may want to add a fill to a busier phrase. As the song grows, you emphasize the dynamics by changing phrases and/or tweaking other controls (Sweep, Ambience, Mix, mod wheel intensity etc.).

For easier understanding, UJAM have borrowed a lot of terminology from the world of acoustic drumming. Drums played by a skilled musician are an ever-evolving performance that helps the rest of the band to build a song and make it sound interesting – and that’s true for any electronic music genre.

Never Spend Another Moment Beat Slicing Or Searching For Samples

As with every UJAM product, VOID benefits from their frustration-free design philosophy meaning anyone can use this product to make music faster, better and easier, regardless of their music production experience level.

Before we look at things in more depth, let us first explore how to play VOID, as that may be all you need for now.

The keyboard section of the UJAM Beatmaker window is dedicated to firing off drum hits and controlling the drum grooves. Keys in the left half trigger individual drum sounds, whereas keys from C3* and up let you select the various patterns that make up the arrangement of a song.

If you know these things and can switch presets, you know all you need to start producing with UJAM Beatmaker.

At the top of the UJAM Beatmaker window you can load presets. A preset is always a complete UJAM Beatmaker setup, i.e. it will change the grooves as well as the kits and effects. At this point, just go through different presets and try different Style phrases to get an impression of the musical and sonic palette of UJAM Beatmaker.

There are a few curved sliders that you can use with any Kit and Mix:

The layout is similar for all UJAM Beatmakers, with little deviations in some of the special Instruments. This means that you can use MIDI patterns you created for one Beatmaker with any other one, or you can use dragged-and-dropped phrases between the different Beatmakers.

In this section you can select a drumkit by either clicking its name to open the list, or by stepping through the list using the little arrows. There are 10 kits to choose from, each with its own set of samples. Use the kit names as a guideline.

Although you can play individual drum kits, the real power of UJAM Beatmaker – particularly over audio loops – is in playing drum performances that you can real-time-control. All you need to do is tell your drummer which parts to play and when by using the Style section of the Keyboard, and it will create a complete song in a specific style.

In UJAM Beatmaker, drum performances are organized into Styles and Parts. There are 45 styles, each covering a particular groove. Styles are broken down into song Parts: You’ve got intros, verses, choruses, breakdowns, fills, endings, and bonus parts called “Special”. 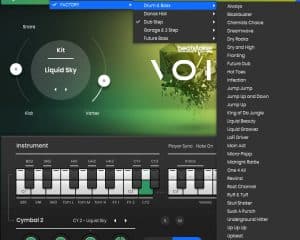 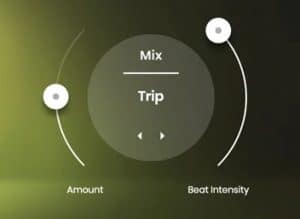 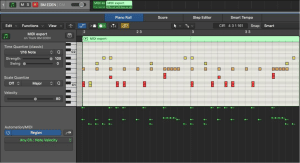 You can easily tweak and change the individual sounds that make up a complete Kit and/or Style. When you click on any of the Drum keys (C1–D#2), the name of that drum appears in the Drum Edit area directly below.

There are four knobs and an output switch for tweaking that particular sound:

You can choose to send any Instrument Channel either to the Master Section (default) or to an Individual Output that will be fed to an Aux bus in your DAW. The order in which Instruments are sent to the DAW is the same order as on the Interactive Keyboard, preceded by the Master Output.

Beatmaker sets up individual channels for all instruments individually – even HHTs and Toms have their own channels, with one exception: Cymbals are grouped to one Individual Output.

Note: Mute and Solo can’t be used for drums sent to individual outs.

The Mix Section of Beatmaker looks rather simple, yet under the hood it features a 12-bus mixing console with multiple audio processors in each channel strip, with hundreds of parameters macro-controlled by the Preset selector and the Amount knob.

Tip: With the Amount Control fully up, step through the Mix Presets until you’ve found the type you like, and then dial down the Amount until you the amount of processing is just right.

Beatmaker lets you drag Song Parts from the Interactive Keyboard into any track of your DAW, where it will be converted to a MIDI region with editable notes.

To drag a Song Part from Beatmaker into your song, click and hold in the dotted drag area of any Song Part key on the Interactive Keyboard and drag the mouse pointer over to the target track.

Things you can do using Drag and Drop:

So What Exactly Can I Do With “Beatmaker VOID”?

Combining the styles, grooves and sounds typical for Drum & Bass, Beatmaker VOID offers you the musical flexibility of a drummer, putting you into the producer’s chair!