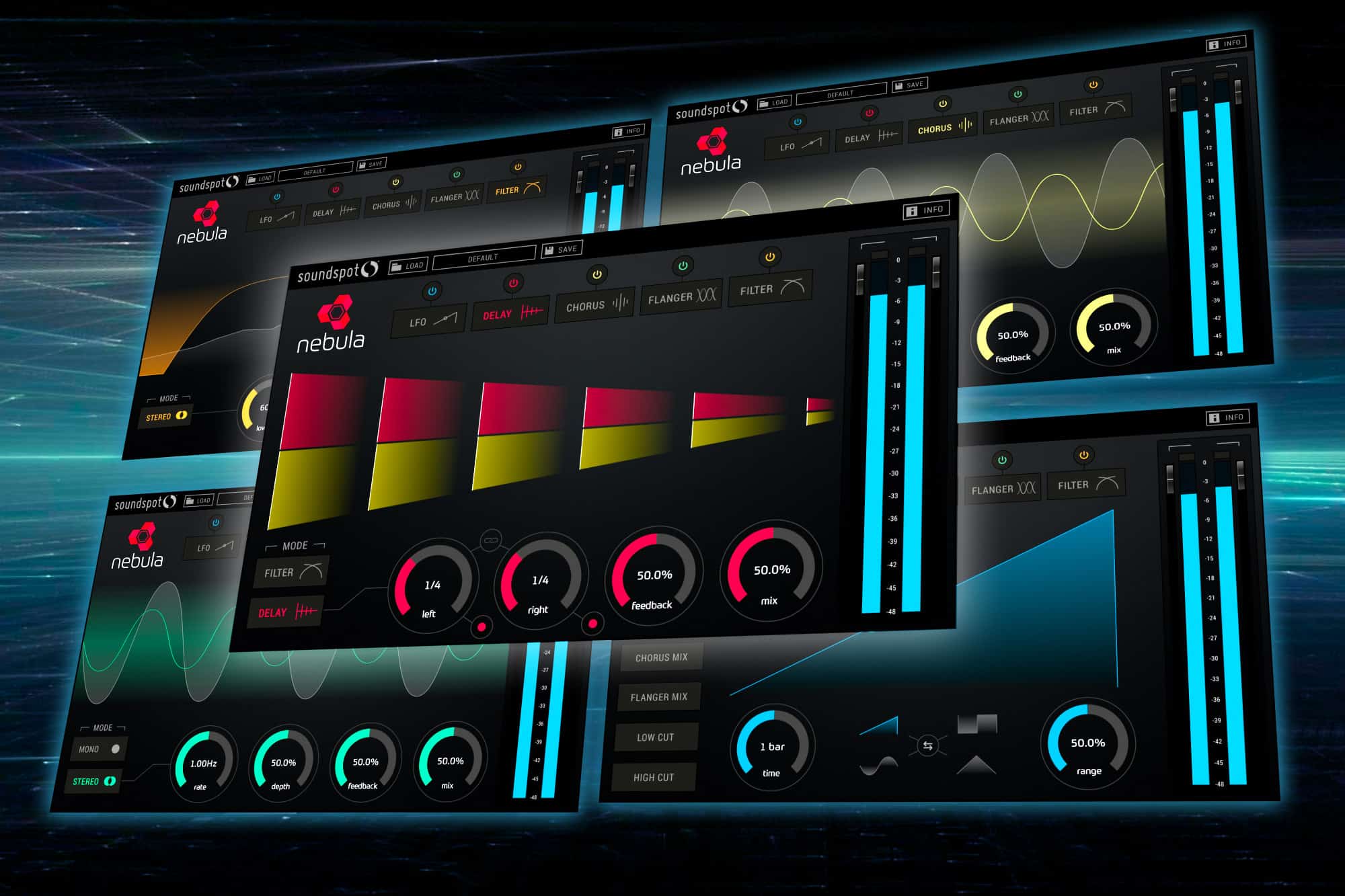 After the release of Oracle, Soundspot’s creative reverb plugin, they were inundated with requests from customers asking if they could release the flanger as a plugin in its own right. They thought this was a great idea, however they felt they could do one better than that, and began the development of “Nebula”.

“Nebula” is a multi-fx plugin that features Stereo Delay, Chorus, Flanger, Filter & LFO sections that can be used to add serious sonic madness to your music!

The signal path of the “Nebula” is one that has been used by Soundspot’s in-house sound designers over the last 3 years. When the signal path was combined with 5 powerful effects, an intuitive interface and super lightweight code, Nebula was born. 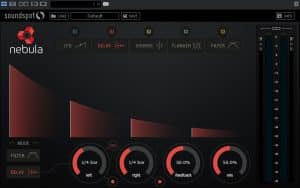 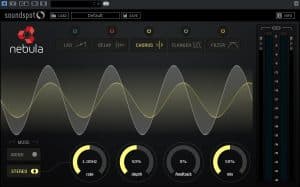 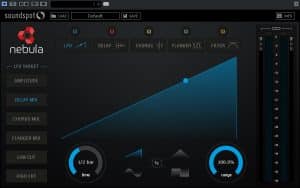 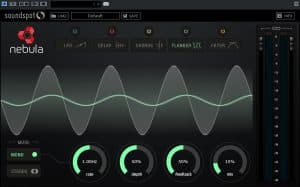 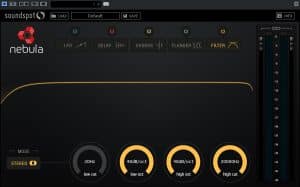 Inspiring Effects In An Easy To Use Interface For Boundless Creativity!

The 5 FX modules in Nebula can be used individually, as well as within the predefined signal path. Simply click the power icons at the top of each module button to activate the effect.

The power buttons work independently from the module select buttons, which is useful when working in another module and wanting to quickly bypass other effects to A/B test.

The ‘Delay’ module on Nebula contains a host of features that allow you to create depth and space to your sounds.

You can remove any unwanted frequencies using the filter button, which flips into its own dedicated section – work in mono or stereo mode by linking the left and right channels, add dotted or triplet variations to the left or right signal and control the feedback and mix of the effect with ease.

The display provides you with visual feedback, enabling you to make accurate decisions when designing your delayed signal.

The ‘Chorus’ module can be used to add additional width to your sound by creating a detuned effect.

The rate parameter allows you to select the speed of the effect, whilst the depth controls the amount of pitch variation required.

Feedback controls the amount of modulated signal that is fed back into itself, and the mix parameter allows you to blend the effect with the original signal.

There is also an option to flip between a mono and stereo effect.

The ‘LFO’ module is where the magic happens and can be used to bring your sound design to life.

The left-hand side of the module has target selectors, allowing you to control various parameters within the other modules.

The LFO itself has 4x different waveshapes, including sawtooth, sine, triangle and square.

Each of the waveshapes can be flipped independently to create a polar opposite of the effect.

The LFO time can be set from 1/32 to 32 bars and can be used to create percussive-grooves, or an effect that modulates over a longer period of time. The range parameter specifies how much of the LFO is applied to the original signal.

The ‘Flanger’ module can be used to add additional movement to the sound.

The ‘Mix’ parameter can be used to blend the effect into the mix, as well as being controllable via the LFO to gradually or quickly change over time.

The Flanger also includes the same mono stereo controls as the ‘Chorus’, which means you can have one effect working in the middle, whilst the other takes control of the full stereo image.

The ‘Filter’ cut works on the entire signal and can be manipulated to great effect by the LFO.

The module has mid, side and stereo modes giving you great flexibility for manipulating the end of the signal path.

The filter features low-cut and high-cut controls which range from 20 Hz to 20 kHz, as well as slope controls that cover 12 dB per octave through to 48 dB.

So What Can I Do With “Nebula”?

“Nebula” is a multi-fx plugin that can be used to add serious sonic madness to your music! It comes with a number of creative of tools including:

Each of which can be controlled independently and then combined to produce a unique sound that is all yours! 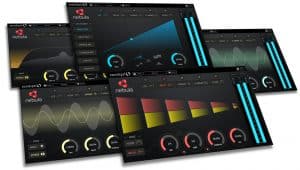