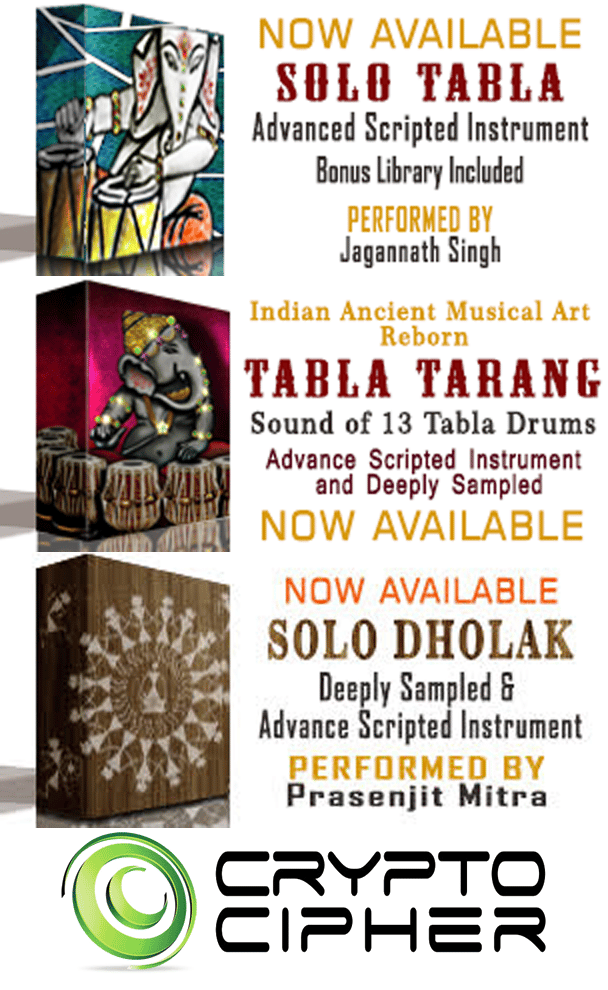 Together these instruments will bring a unique exotic layer to your compositions and are perfect for Cinematic Underscore, Fusion, Ethnic & Traditional Indian music and much more!

With these instruments in your collection you’ll be able to add a unique, exotic layer to any production. These libraries are perfect for Cinematic Underscore, Fusion, Ethnic & Traditional Indian music and much more! 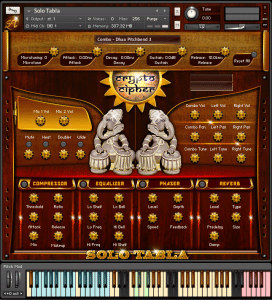 “Solo Tabla” is a playable multi-sampled Kontakt instrument with two mic positions and advance script. You can have control over each sound as well each drum. Solo Tabla can be tuned up as well tuned down with the micro tuning feature on each sound.

You can improvise midi patterns and change the sound via mic positions/tunings/panning and velocities to get an amazing sound.

This library also includes special effect controls like mute, doubler, heat and wide – along with basic effects and 7 impulse response reverbs made specially for this library.

Bonus Patches also come with “Solo Tabla” which are performances based in various creative styles.

“Solo Tabla” and “Tabla Loops” were both recorded in the same room with “Royer Ribbon Microphone” and other microphones.

Jagannath Singh has played Tabla for more than 35 years and is well trained under “Banaras Gharana*”. He is known for producing a very dominating sound using both the drums extensively and yet maintaining the fine balance of the overall sound of the Tabla.

He has won many national awards from the “Ministry of Cultures” for his playing style and currently works as a full time artist under the Ministry of Information and Broadcasting.

*Gharana indicates a comprehensive musicological ideology. This ideology sometimes changes substantially from one gharana to another. Some of the gharanas well known for tabla are: Delhi, Ajara, Lucknow, Banaras, Farukhabad and Punjab.

“Tarang” means waves. Many hand made tabla drums are tuned separately by hitting a hammer on the rim of the tabla according to “Raga” and all tabla drums are placed in semicircular positions covering a lower bass tabla from the left to a higher pitched tabla towards the right.

Each tabla has its own character and the melodies are produced striking the centre of the tabla with the Black Ink spot producing a unique sound. When an artist performs any emotional raga using these different tablas, it sounds very exotic!

Crypto Cipher have sampled 13 tabla drums for this library, not just with the magical black ink spot sound but also the two other tuned sounds “Ta” and “Tin”, which are produced by hitting the rim/chanti and middle portion/maidan of the tabla drum. So you have three main tuned sounds “Ta” “Tin” and “Tun” mapped across the keyboard.

Crypto Cipher recreated this instrument for modern music composers and recorded almost 15,000 samples with three mic types (Ribbon, Dynamic, Condensor). With the powerful scripting engine technology of Kontakt they have pushed the capability of the instrument to the next level with legato and drum articulation sections, which will help composers to play the instrument in more advanced ways. You can also do sound design stuff and create textures never created before!

This instrument can be layered with other sounds and it can also be used as part of a main background theme of a movie as its character is so unique. In performance these instruments can create very emotional and heart touching melodies and on the other side you have the aggressive punchiness of “Ta” and “Tin” sounds. You can also use this instrument in your drum track to create fillers etc.

Top Rack  “Tune” and “ADSR” is for each key , which helps fine tuning for each drum/key

There are many applications for this library, just play the instrument and see what inspires you! 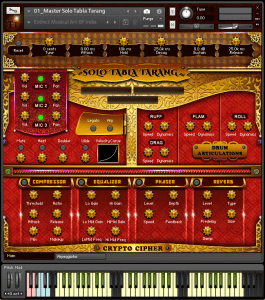 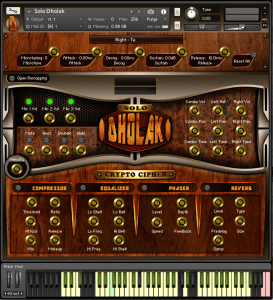 The “Dholak” is quite a popular percussion instrument of India. It has been used in the Indian Film Industry and Folk music of India since inception. It is widely used in qawwali, bhajans, kirtan, lavani and bhangra. These days the Dholak is used in many fusion genres of music.

This library is the first and most advanced playable “Solo Dholak” sampled instrument available, with over 12,900 samples recorded with high quality equipment. Sampled Dholak has always been a great need of producers working in the film industry, so Cryptro Cipher started working on the concept and finally developed a playable Dholak instrument with modern sound design capabilities.

With this library you have fine control over each sound as well each side of dholak drum. Solo Dholak was recorded with a Sontronics Apollo (a Blumlein X/Y stereo ribbon microphone) , Royer 122, Lewitt mics and bodied mic. Mic mix settings are controlled via the Mic Mixer in the GUI.

The Dholak and Tabla Combo is extensively used in many Bollywood movies. You can now layer both of these instruments and use the “Remapping” feature and “Individual sound control rack” on top of the GUI and create a fine blend of two sounds.

Use Fine Tune and ADSR control to mix each individual sound in its layer (You can have a snap of dholak sound and a tail part of a tabla sound for instance) – This way you can create a fine mix of both these drums. Just save the Multis Patch once to achieve your desired layered sound of our Solo Dholak and Solo Tabla.

About the Dholak Artist

Prasenjit Mitra is master multi-percussionist of India. He is an award winning “Solo Tabla” Player who has performed many times in India as well abroad. A disciple of Farukhabad Gharana initially and then he worked a lot with other gharana styles, which makes this style of playing very unique. You can see his performance at the Crypto Cipher studio here.

You will find this instrument is both inspirational and easy to use in your productions!

So What Exactly Can I Do With “Solo Instruments Bundle”?

If you’ve been looking for something to add an unusual colour to your percussion tracks or to add an authentic ethnic flavour to your compositions, then “Solo Instruments Bundle” is exactly what you’ve been waiting for. It is perfect for but not limited to the following styles of music:

Note: Requires the Full Retail version of Kontakt 5.4.2 or higher (NOT compatible with the Free Kontakt Player)