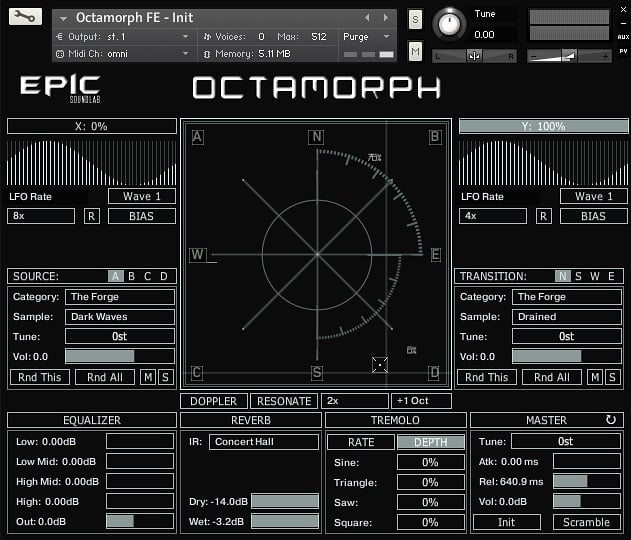 82% off “Octamorph FE” by Epic SoundLab

The Octamorph user interface is built for ease of use, giving you full access to all the features of the library in a single screen.

If you own a tablet, you can also use the basic templates for TouchOSC or Lemur that are included to fully enjoy the Octamorph morphing experience.

This edition is built around the drones section from Epic Sound Lab’s acclaimed library “The Forge“.

NB: Not compatible with the Free Kontakt Player

The core function of Octamorph is to build complex sounds starting from 8 sound sources, each one assigned to a coordinate in an XY plane.

Each axis can be controlled both manually (by using the big X and Y sliders) or via dedicated scripted tempo synced LFOs. Each LFO features 9 hardcoded waveforms that can be modified by the BIAS slider. The main XY Radar Monitor works as a reference for the current position of both axis and, when the Scripted Riser Engine is engaged, as a reference for the riser/downer pitch position.

Samples are divided in two main groups called SOURCE and TRANSITION. Sources are mapped to the corners of XY plane, while Transitions to the cardinal points. In this “lite” version of Octamorph, both Sources and Transitions share the same sample set from The Forge.

Each one of the two axis can be controlled by a dedicated section featuring a Manual Slider or a tempo synced Scripted LFO. Each one of the two Scripted LFOs feature 9 waveforms that can be further modified by tweaking the BIAS slider. The LFO speed rate ranges from 16x to 1/4th. When you select “Manual” from the LFO Rate menu, the position of the current axis is controlled by the slider above the LFO table.

Below the Radar Monitor you’ll find a set of additional parameters. Taking advantage of the bi-dimensional nature of Octamorph we can use the Doppler create dissonant scary textures or fly-bys. XY axis controls the sound shift, while increasing the Doppler slider will make the effect more dramatic resulting in total silence when the Y axis is on the bottom part of the Radar Monitor and a wider pitch shift when moving along the X axis. The Scripted Riser Engine is dedicated to build risers and downers by pitching up/down the current mix up to 4 octaves.

The Reverb section features a selection of natural and designed reverberant spaces. You can control both Dry and Wet signal level independently.

The Tremolo section features a tempo synced tremolo that could be also used as a rhythmic gater. You can mix up to four different waveforms using each of the four bipolar sliders available. By setting a negative value, the waveform phase will be inverted.

Import Your Own Samples

With Octamorph FE, you can import your own samples to use them within the interface. Watch the video to see how this is done.

The Master section features global instrument controls. In this section you can transpose the instrument up/down 4 octaves, control the overall volume Attack and Release and the gain level.

You can also reset the instrument to its default state by using the Init button.

The Scramble button will randomize both LFO sections, the sample selection for all 8 layers and the Resonate parameter. This will provide you an easy way to create new presets without having something totally random.

At far end of the Master label, there’s a little Mode button. You can switch between Loop and One Shot. Loop Mode is the default and natural behaviour of the instrument, with all LFOs oscillating forever.

One Shot mode acts differently according if the Scripted Riser Engine is engaged or not.

So What Could I Do With Octamorph FE?

The ability to import and use your own samples means you can either use the included presets and sound and tweak them to your hearts desire or alternatively just import your own sounds and create something entirely different from scratch!

Its absolutely perfect for a range of styles and activite including:

NB: Requires the Full version of Native Instruments Kontakt 5.1 or higher. THIS PRODUCT IS NOT COMPATIBLE WITH THE FREE KONTAKT PLAYER

What People Think About 82% off “Octamorph FE” by Epic SoundLab