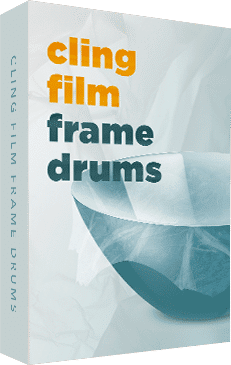 Cling Film Frame Drums is a deep sounding percussion instrument made in the kitchen.

It was created by recording hits on cling film on a bowl, and sounds like a real frame drum – perfect for underscore and cinematic music.

Tasty Percussion Made from Dinner’s Leftovers

Cling Film Frame drums was recorded by sampling multiple hits of cling film over a bowl with dinner’s leftovers in it.

It has a nice deep sound that works perfectly for cinematic, underscore and ethnic music, sounding just like a high pitched tom drum or bonjo drum.

Enter your email to get notified when the next deal drops.
adroll_adv_id = "SA6YI6QPJFFVHMLXKKOGPG"; adroll_pix_id = "6DHFHOVRYFFADOKESKHU4J"; adroll_version = "2.0"; adroll_current_page = "other"; adroll_currency = "EUR"; adroll_language = "en_US";