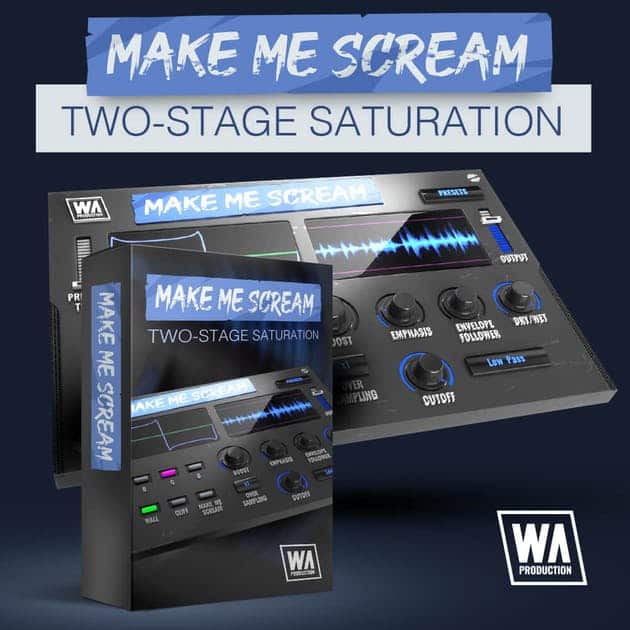 In a world with so many options for distortion and saturation, where do you turn when you want an effect that really slams? W.A. Production have the solution to your saturation search, with “Make Me Scream”.

This plugin includes preset settings for vocals, drums, bass, full mixes and even some guitar amp simulations. Use them as they are, or as jumping-off points to tweak the audio to your taste!

The musicality of your audio is maintained with a smart signal follower that shapes the distortion envelope in line with the transients of your track. 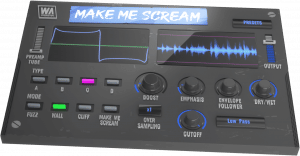 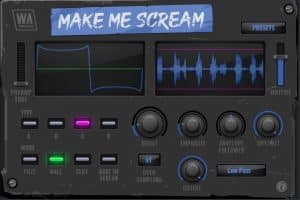 To get the most from distortion it’s a good idea to feed the module a slightly saturated signal in the first place, so W.A Production have added an adjustable preamp tube at the beginning of the signal chain. This 2-stage effect results in a far more dramatic sounds then regular distortion, as the initial tube processing gives the distortion a juicy overdriven signal to latch on to.

With a range of different distortion types, Make Me Scream can handle tasks from subtle saturation and excitement to batter-the-door-down distortion. The 4 modes are; Analog tube saturation, Soft clipping saturation, Regular distortion & Folded sinus distortion. Each of these 4 types of processing will produce a different character and it’s easy to see which mode you’re currently using with the handy interface graphics.

Depending on which distortion type and mode you use, you’ll hear the audio mangled in different ways. The 4 mode buttons allow access to different styles of processing, with each effecting the signal frequencies in their own way. These modes are named; Fuzz, Wall, Cliff and Make Me Scream (of course). Fuzz is a balanced mode, Wall creates a more muted tone that concentrates on bass, Cliff emphasises the mid range frequencies and Make Me Scream mode brings out the higher frequencies.

Prior to the signal entering the distortion module, you can add analog tube saturation with the Preamp Tube slider. Then feed the signal level into the distortion unit as carefully or as recklessly as you like by using the Boost dial. This increases the gain on the incoming signal by up to +40db.

The smart filter controls allow you to shape your distortion far more musically than more vanilla distortion plugins. Set the Filter to High, Low or Band Pass modes and then set the Filter Cutoff to your taste. For example, you might only want to emphasise the highest frequencies on a whole track, or maybe just the lowest frequencies for a snarling bass line. The Emphasis dial sets the level of frequency boost, for a more pronounced effect around the cutoff frequency that you’ve chosen. The Envelope Follower dial makes the plugin react to the transients of the signal, creating a rhythmic and musical auto-wah feel.

Set the amount of internal oversampling from the default x1 up to x16, allowing users with enough CPU power to limit the unwanted non harmonic artefacts in the processed audio. Use the Output slider to compensate for any gain  boost or reduction caused by the distortion unit, allowing for very accurate comparisons when A/B’ing. Use the Dry/Wet Ratio control to dial in as much (or as little) of the distortion as you need. Use a conservative ratio for subtle top-end sparkle or push the dial further to bust your bass bins.

The live visual meter to the top right of the interface shows exactly what’s happening to the signal as it’s being processed in real time. This allows for accurate monitoring each time you decide to make a change to the parameters. The boundary lines at the top and bottom of the meter show when you’re pushing the output signal beyond 0db, so it’s easy to tell the difference between the characterful distortion of Make Me Scream and the digital peaking of the plugin being driven beyond its limit.

With many included presets, it’s easy to find the perfect starting point for your own journey into distortion and saturation. Tailored to specific instruments, genres and effects, these factory options can be used on many types of audio. The presets include everything from subtle saturation to completely strangled and squashed processing.

What Can I Do With “Make Me Scream”?

Designed with an easy to understand interface, “Make Me Scream” makes it incredibly easy to add rich two-stage saturation to your tracks or to individual instruments including: 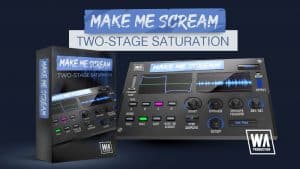 "Make Me Scream" by W.A. Production