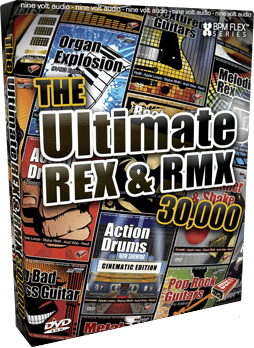 The Ultimate REX & RMX 30,000 is a collection of 28 loop libraries covering pop, hard rock, cinematic, electronic, world, heavy metal, funk, soul and blues music. With over 30,000 loops at a value of nearly $2400, the bundle combines award-winning libraries with a price that is unheard of in the industry.

These libraries are musically and sonically compelling, flexible and well organized. Whether leading a track with rhythmic or melodic direction or taking a supporting role in an existing piece, hobbyists and professionals alike find the libraries inspiring, practical and easy-to-use.

28 Incredible Products (Worth $2,400) Included in the Bundle

These products have never before been included in the bundle, but are now available as an exclusive additional bonus to the Ultimate RMX 30k Bundle on VSTBuzz:

The libraries included in the Ultimate RMX 30k Bundle have won or been nominated for multiples of the below awards:

Available in 2 Flexible Formats: REX & RMX (or both together!)

REX2 (a.k.a. REX or .rx2) is one of the most popular and widely supported loop formats for sequencers and software samplers.

Stylus RMX is a groove-based virtual software instrument with a focus on real-time groove creation and performance. It is recognized for its flexible, creative and musical playback of REX2 loops.

Loops in this format are specifically organized for quick and easy use. No conversion process is needed to use this format (i.e. no need to use RMX’s SAGE Converter).

Note: Stylus RMX is NOT included in this bundle, it can be purchased separately HERE

“BPM Flex™”: What It Is & Why It Matters (and Comparisons)

BPM Flex™ is a special technique used only by Nine Volt Audio which allows every loop to be used at virtually any tempo with no artificial stretching! Watch the video below to see how incredible it is:

So What Could I Use the Ultimate RMX Bundle for?

With 28 libraries to choose from, in a HUGE range of styles, you can use a combination of the libraries to build an entire track, or even just use some loops to get some inspiration for starting a track.

The options are literally endless! And because each file is divided into rhythmic and musical “slices”, loops from the Ultimate 30k Bundle can be manipulated in all sorts of ways.

Slices: Re-Order & Multiply: In this Big Bad Guitars V2 loop, the first two measures play normally while the 2nd two feature the slices of the loop re-arranged melodically and rhythmically, creating a thrash-ier version of the loop.

Individual Slices: Effected, Re-Pitched & Reversed: In this example from Action Drums: Breakbeat Edition, the first four measures are played normally, while the next four measures have reverb, delay and reverses applied to some slices. Achieving this is simple in Reason and Stylus RMX, among other players REX players.

Watch the video below to see just how easy it is to combine these libraries together!

What are you waiting for?